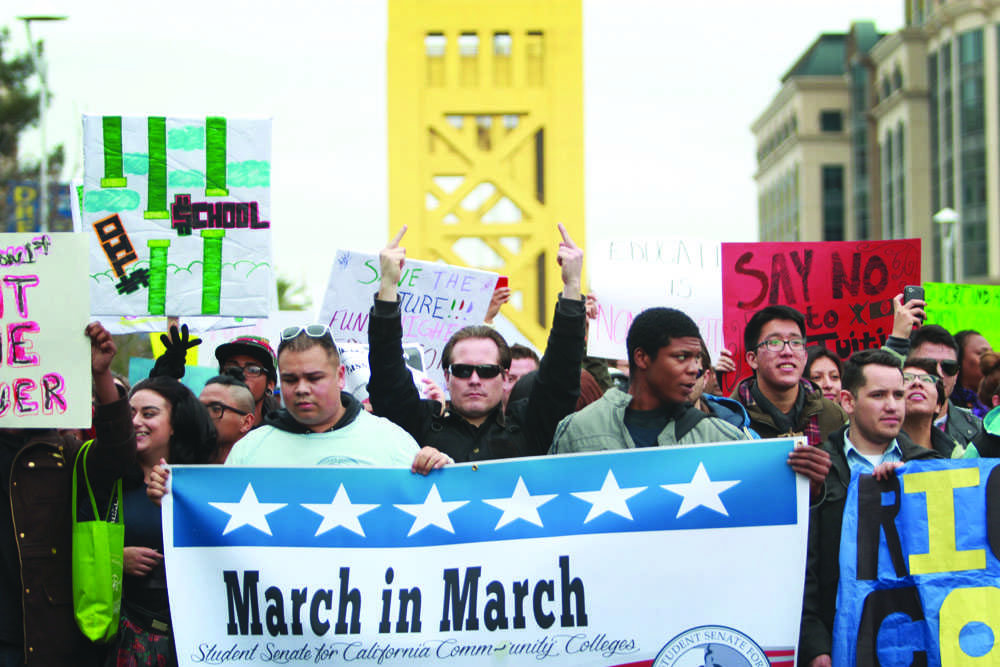 Leading the march, Keith Montes of Diablo Valley College raises his middle fingers "to express his frustrations with the education system of California because of the millions of dollars cut from education each year." (Photo by Emily K. Rabasto)

On Monday, March 3, community college students from all over California gathered at Raley Field for the annual “March In March” rally, which seeks to protect the affordability and accessibility of public higher education.

Among those present were representatives from the Associated Student Body Student Senates of American River College and Folsom Lake College, accompanied by Los Rios students and faculty.

ASB Student Senate President Kenneth Hinton was among the representatives from ARC, stating “(Textbook affordability) is the issue that we as a district care about the most, so that’s what we’re sticking to for our district, but other districts in our state have lobbied for other things.”

The ASB representatives from the Los Rios Community College District coordinated heavily regarding their stance and goals.

“We’re hoping to accomplish that we as a district can show unity, because we’re the only multi-member district in the region (two) and there’s 11 colleges in our district (region). The rest of them are single-district regions, so we’re hoping to just show unity across Los Rios, and let our other members from across the state know that we’re all here from Los Rios to support the cause,” said Hinton.

Folsom Lake College ASB Student Senate President Jonathan Rogers believes that the issues addressed during the March in March are of particular importance to the Los Rios District.

“The Los Rios District is the second-largest district in California. We are the closest to the Capitol and we have a responsibility to represent every community college student in California,” said Rogers, “Just looking at my own school, Folsom Lake College, a lot of students are on financial aid, overwhelming percentages, so we’re not the rich white school that everyone thinks we are, but everyone I know, all my friends, everyone that comes to me, they work two or three jobs just trying to pay for textbooks, to pay for classes and they realize the importance of education overall.”

“I feel like this is an important cause. Students uniting from all over the state to show the legislators that we’re serious about our education,” Sturgill said, “I think it’s important for students to get involved. I’m not going to say that it seems like a lot of students just don’t care, but I don’t think they understand the ramifications of not getting involved.”

Adaptive PE student Hubert Johnson stated that he came out of curiosity.

“I actually wanted to know what it was like, because this is my first time,” Johnson said.

According to Sturgill, the weather on the day of the march may have played a part in the low turnout.

“We thought we were going to be a bigger group because we had more people who booked for it, but they didn’t want to get rained on, so a lot of people cancelled,” Sturgill said.

The march lasted from 10 a.m. until just after noon, beginning at Raley Field and ending at the south side of the State Capitol, where speeches emphasizing the importance of community colleges and thanking students for their participation were given.

Former ARC student Martha Penry, now an educator for the Twin Rivers Unified School District, was among the speakers, telling the assembled crowd “My daughter and I are both products of American River College, just down the road from here. We know the value of community colleges. My community college education allowed me – and I know it will allow you – the opportunity to reach career and personal goals.”

Students were given the opportunity to lobby immediately following the rally. Hinton did not.

Photo gallery: Clinton headlines ‘Get Out the Vote’ rally at UC Davis