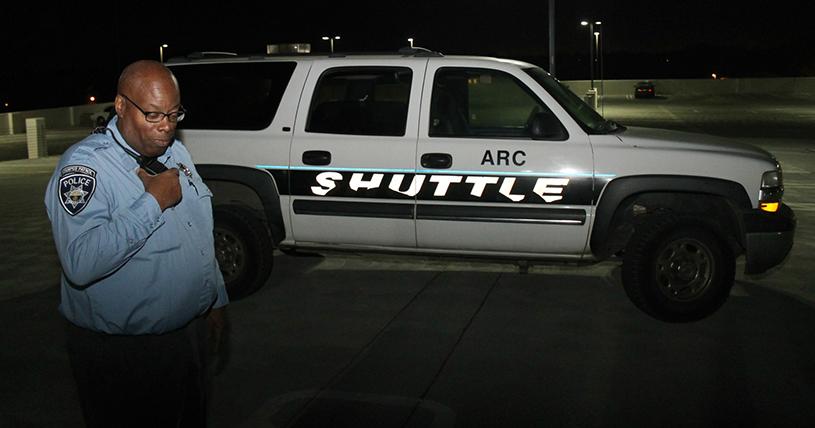 Aaron Fields is a campus patrol officer who drives students to their vehicles in the ARC shuttle from Monday through Thursday. (Photo by Jessica Maynard)

People come and go throughout our lives whom we never really give a second thought to. The same goes for many of the people on campus helping to keep it safe. With many news outlets letting people know of what is going in their communities, a great way to ensure safety on campus is by using the available resources.

Aaron Fields is a campus patrol officer that keeps American River College safe during the weekends and drives the ARC shuttle from Monday through Thursday.

The ARC shuttle is a free, on campus shuttle service provided to students and professors Monday through Thursday. The shuttle can take anyone to any part of the school. According to the Los Rios Police Department website, “The shuttle runs every 60 minutes between the hours of 5:30 PM and 10:30PM. You can wait at the shuttle stops or to request one sooner, you can call the American River College Police department.”

A log of every pick up and drop off point is kept throughout the night. Fields also stays by a person’s car to ensure the driver gets in safely.

“I always wanted to work for the police department, not in the capacity of being a police officer,” said Fields. “So, like patrolling the campus after hours when the police officers are not here. The officers basically work Monday through Friday and we (the patrol officers) take over the campus on weekends.”

Fields calls himself a people person. “I like to listen to people and sometimes, I don’t give unwanted advice, just maybe what I might do (in their situation),” said Fields

Other than providing people with a safe way to get to their cars at night, Fields is also around to help jump dead batteries, or to alert campus police of any mischief going on around campus.

“As far as weird, I took these two young ladies, they were going to a fitness class,” said Fields about some students who on occasion used the shuttle. “I guess they had some sort of issues at home, and they came to school a little intoxicated.”

Fields reported the incident to campus police, but by the time authorities showed up the two women had already left campus.

Fields has his regular students that use the shuttle on a daily, if not, semiweekly basis. “I have people that for the last two or three semesters,” have repeatedly used the shuttle, said Fields.

“One lady – this probably happened my first year doing the shuttle – she gets in and the heat was on or something, and she just turns it off,” said Fields. “and I thought ‘Okay, did she just do what she just did?’ and I just let it go because she was a loyal rider for a semester and a half.”

There have been a few times where Fields says that people can’t remember where the park their cars. “Everybody, when they can’t find their car, (they think) their car is stolen,” said Fields. He said that there have been about one or two incidents where a car was actually stolen.

Veronica Ah-Mann, a transfer student to Sacramento State that graduated in May said, “In my five semesters here, Mr. Aaron has driven me to my car maybe 50 times. He’s always professional, always has a smile on his face and always very courteous. I appreciate that kind of service especially in today’s unsafe climate.”

Behind the ‘Domestic Crusaders’