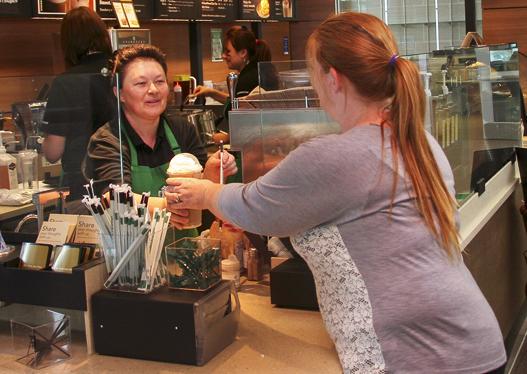 A stand out at Starbucks, a Ukrainian Barista is a sight to see.

With all the faces on campus it’s always difficult to find someone that stands out. Most of us go through the day without so much as a second glance at any of the other people here except for a campus Starbucks employee.

Alla Kozlova quickly became one of American River Colleges most popular figures at Starbucks. Every Monday through Friday morning, you can find her complimenting her customers, and making sure everyone leaves with a smile on their face with their favorite coffee in hand.

“I love to make people happy and send them off in a good way,” Kozlova says.

Although Starbucks is new on campus, Kozlova is not. She has worked at ARC for eight years, mostly in the cafeteria and formerly at Java City. Starbucks quickly became her favorite place to work, as she enjoys the higher volume of customers and the fact that students ask for many different drinks in different ways.

But her drink of choice is a standard favorite. “Caramel Macchiatto” she says, as it rolls off her tongue with an accent thick and sweet as breve foam, and her rosy cheeks bloom with glee.  Koslava has her beloved drink every morning. “Unless it’s busy, then I have it after work,” she said.

“[Kozlova] is very genuine,” said Courtney Klousner, Kozlova’s supervisor at Starbucks and a psychology-philosophy double major. “When she talks to customers, she always compliments their name. I’ve heard her say that to customers with a typical name. It’s just the cutest thing ever. And she means it every time she says it.”

Salvador “Sal” Leon, a psychology major who also loves caramel macchiatos, said it was “awesome” to have Kozlova compliment his name. “It definitely lightens my day.”

Although Kozlova spends most of her time working on campus, she was once a student at ARC as well. She studied ESL for a few semesters, but found that there wasn’t enough time to be a student and take care of her family. She does hope to one day get her degree and become a registered nurse, a job she had for 14 years back in her native country of Ukraine, before coming to Sacramento 10 years ago.

Outside of Starbucks, she loves to spend her time outside, tending to her flower and vegetable gardens, as well as camping with her family. For more peaceful moments, she loves a good book. Currently, she is reading “Gone With the Wind”. “I like the history in the book,” Kozlova said.

Kozlova is “the oldest, wisest of us all. She takes care of us, but we all take care of each other,” Klousner said.

For many, a little dose of Kozlova’s TLC, along with their cup of joe, is the perfect nurturing addition to their day.