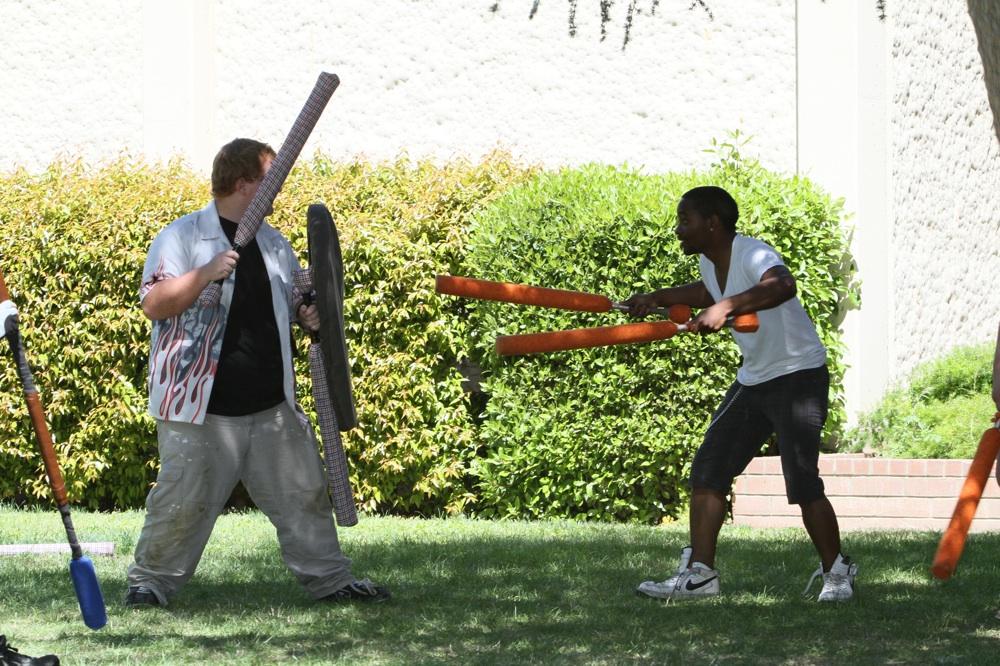 Foam swords, fancy garb and medieval hierarchy. Live-action role play, also known as LARP, is a game where people get together and act out certain situations or scenarios while holding the position of a character.

LARP started in the late 1970s and started to spread through the 1980s. Amtgard, a medieval fantasy game, was created in El Paso, Texas in 1983.

Amtgard is the club and local chapter of the popular game at American River College. The club began a year ago, but was then dropped for a semester. It has been going strong for the past two semesters and was picked up by Andrew Davis, who is the current president of the Amtgard club on campus.

According to Davis, Amtgard gets their inspiration from areas such as comic books, movies and video games. For their last reign — or match — they did a Star Wars theme where everyone had themed clothes and gear from the sci-fi classic.

“You don’t really need skills to LARP. Over time you get to develop your own type of character,” said Melissa Cross, psychology major and member of Amtgard.

The foam swords that are used in Amtgard are made of materials such as pool noodles, golf shafts and PVC pipes. “It’s like being hit with your brother or sister’s pillow when you have a pillow fight. It’s really not that bad,” said Cross.

Safety is important to Amtgard, and club members constantly look out for everyone, making sure fights don’t get too rough or out of hand. Reeves, which are like referees, will stop a game if it ever gets too violent. “I can’t stress to have fun with it. I’ve made a lot of friends from doing this, people that I hang with outside of Amtgard at school,” Davis said.

There are even a few games-within-the-game that Amtgard plays, such as ditching and battle games. Ditching is a practice where each team gets in a line in a malicious style and fights. Battle games are one team versus another with a set of objectives where each team uses their abilities and class system. They’ve even created their own sports such as jugging and goblin football. Activities aren’t pigeonholed to include variations on fighting. Amtgard also puts on arts and science tournaments, where members create things and present them to fellow members to be judged.

Garb is the traditional dress for an Amtgard player. Garb consists of tunics and robes or cloaks. Some more ambitious members will even go so far as to make their own armor and weapons, like shields, javelins, and arrows, and use materials like leather.

Amtgard meets every Sunday at Fair Oaks Park at noon, and stays until dark. Their audiences are typically large and quite rowdy. Anyone is allowed to join and, as Davis says, no skills are needed.

“I find it quite enjoyable and fun, just to kind of goof off a bit,” Davis said.