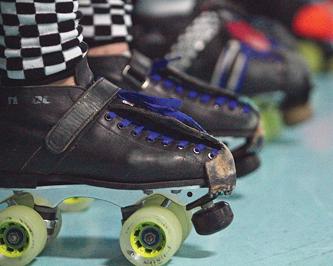 The skates of a roller derby girl at a practice on March 13. (Photo by Daniel Romandia)

With a shrill blow of the whistle, all fears are left at the door. Any problems with school or family are dropped at the sides of the skate rink.  The laces on the skates are double-checked one last time and the helmet, complete with a skate-name written on it, is fastened with a chinstrap.

Hippie Skippie, a psychology major at American River College, and Red Tornadho, an accounting major at ARC, are teammates on the Sac City Rollers derby team. And after checking their equipment, they were ready to roll at a recent derby competition in Rancho Cordova.

Both women are part of the burgeoning female roller-derby scene in Sacramento.

Roller derby has changed dramatically over the years. Despite the fun and cartoonish names of the players, it’s no longer about fake stunts and violence, and has developed into what players describe as a legitimate sport.

The game has been around since 1935, but faded out of the spotlight in the 1970s.  However, roller derby came roaring back in 2001 after it first sparked in Texas and then young women around the nation began to gravitate back to the sport.

In January 2006, the Sac City Rollers formed the first all-women flat-track derby league in Sacramento. Currently, there are two leagues in the city, each with several teams – and dozens of players — under the banner.

“When the revival happened in Texas in 2001, it spread like wildfire everywhere,” said Tornadho, who, like Skippie, goes by her stage moniker (the league has asked them to keep their real names private). “The ‘do-it-yourself attitude’ really has kept (Sac City Rollers) going even six-and-a-half to seven years later.”

Many people look at derby and have no idea what is going on, and to the naked eye, it looks like a group of women in helmets and tank tops skating around in a roller rink slamming into each other. While the sport can be physical, kicking and punching can land the perpetrator in the penalty box and any soap-opera dramatics are no longer a part of the competitive sport.

“We do more than just skate in circles,” Tornadho said.

The games are called “bouts.” The rounds that take place in each bout are called “jams.”  The jams last for two minutes with 30 seconds to reset, unless otherwise called off.

The basic set-up works like this: There are two teams, each with five players, and each team has a “jammer” (or the scorer) who wears a star on her helmet and must skate harder and faster than the rest of her team.

The other four members assist in helping clear a path for the jammer to earn points or blocking the opposing team’s jammer so they don’t score.

Skippie, who has her light brown hair cut stylishly short, is a fulltime student at ARC and a mother of four children. She said her 9-year-old girl “can’t wait” to skate for the Bad Apples, Sac City Rollers’ junior derby league.

Skippie became a roller derby girl about two-and-a-half years ago, when a friend suggested that she try out for the team.

“I told her she was crazy and that I couldn’t do that,” Skippie said. “But after I tried out and made it, I’ve been in love ever since.” Skippie’s name came about because she sees herself as a hippy (hence the “Hippie” part) and when she skipped over someone to avoid a fall, she added the surname “Skippie.”

Tornadho, with her athletic build and flowing red hair, is also a fulltime student at ARC. She is the treasurer of the Sac City Rollers and has dedicated the last three years to the team. Tornadho’s decision to become a derby girl had everything to do with her having numerous birthdays at skate rinks and wanting to do more than “just skate.”

After Tornadho attended derby games for six months, she tried out and made the team. She said that derby has consumed her life, but believes it is for the best because the practices push her both physically and mentally.

“She’s such an incredible person,” said Spankenstein, a teammate of Tornadho’s who has skated since Sac City Rollers were founded. “For such an aggressive sport she is the most level-headed person on the team.”

Both women said they feel empowered by the speed and ferocity of the sport, which has some very specific rules.

Skippie and Tornadho said the team is open to adding new teammates and suggested that interested parties visit saccityrollers.com to educate themselves on tryouts, game times and prices.

“Do it,” Tornadho said. “We have some of the most timid girls come in here and they are terrified, but they stick around. They don’t leave.”

As part of a non-profit organization, the Sac City Roller players are not paid to play on the team.
“No one pays us to do this, I pay. It’s all about passion,” Skippie said.

The team currently hosts multiple fundraisers and volunteers their time with foundations, such as Sacramento Children’s Home, the Sacramento Food Bank, and St. Baldrick’s, which benefits children who are stricken with cancer.

The team’s next “bout” will be held on April 14 at the Second Saturday Art Walk in midtown, where the players hope to show spectators why they feel the sport can be so transformative.

“It’s powerful when you put your skates on,” Skippie said as she looked out toward the skate rink. “It feels like freedom. It’s like having wings. I just fly.”

From canine to caretaker

Be the first to comment on "Doing more than just skating"