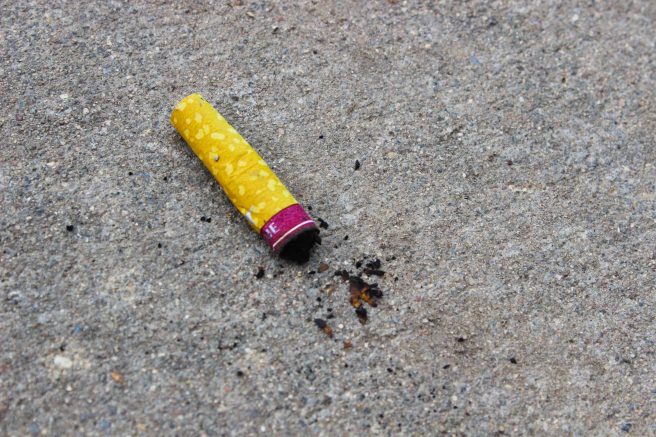 Cigarette butt left on campus. Due to ARC's ban on smoking, student's question where to smoke. (Photo by Lidiya Grib)

American River College’s ban on the use of tobacco products on campus at the beginning of the fall semester has left many cigarette smokers and vape-pen users wondering where it is acceptable to smoke.

Some smokers, chewers, vapors and other tobacco users may feel scrutinized regarding their habit no matter where they are, even in an acceptable spot.

“Walking 10 feet from a building in an open area doesn’t help,” said ARC student Jonni Louise, a first semester student. “I still hear the bickering about me smoking.”

A person who smokes that may be trying to be considerate may still be criticized by those who dislike smoke and tobacco use.

Some tobacco users say they know it does help to be considerate to those who are not.

“I try to be very courteous to anyone who doesn’t smoke so that I can avoid hearing complaints but it never seems to help,” said Christian Lowell, a passerby at the bus stop in front of the ARC campus.

While those not wanting to endure the smell of tobacco and the health risk may feel they should be granted a smoke-free environment.

Those who do smoke may believe they should have an area where it is acceptable to smoke. Since smoking is no longer allowed on campus, smokers must now go off campus.

With a smoke-free campus there is still the potential you may be exposed to the secondhand smoke due to the fact that there are rule breakers who smoke anywhere anyway not to mention the possibility of simply encountering tobacco use close to campus.

“If there was an area that was designated for tobacco use, then non-smokers could avoid it entirely,” Delia Wilson said.

A simple sign in a designated area saying, “this area may contain or cause exposure to secondhand smoke known to the F.D.A. to cause lung cancer and premature birth in pregnant women,” would allow smokers and non-smokers to be comfortable on campus.

James Saling is a second semester student at ARC and a communications major and is a professional poker player and retired pro wrestler.

Former ARC running back to hold workout for NFL teams

Be the first to comment on "Opinion: Students question where to smoke"