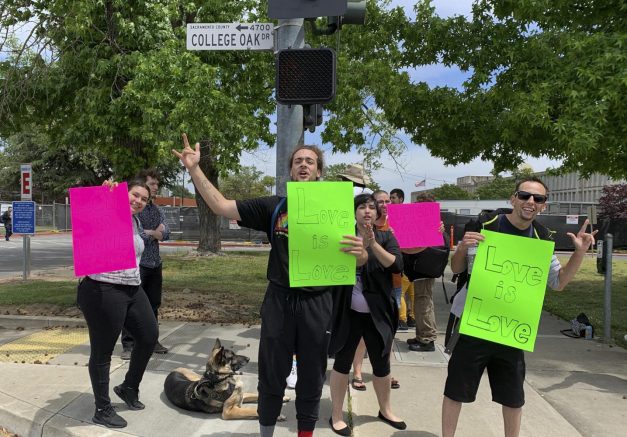 Counter-protesters from American River College attempt to divert attention away from Chauncey Killens’ controversial message on May 13, 2019. (Photo by Luis Gael Jimenez)

After a number of protests involving homophobic language and other controversial messages on the American River College campus, as well as other California college campuses, this past academic year, Universal Engaging Inclusive Transformative Education (UNITE) staff members and some students are beginning to question whether or not protestors should be allowed on campus without little or any check.

On Thursday, Chauncey Killens arrived outside of the Student Center at ARC wearing a sign that read, “MARRIAGE; 1 MAN & 1 WOMAN.” Although Killens was within his right to peacefully protest on campus due to the First Amendment, his message seemed to upset many students and drew an opposing crowd around him.

Killens —who was protesting on campus for the third consecutive day —continued to preach his message, to which multiple surrounding students countered with their own. He said that he’s held protests at other institutions and that he just wants people to hear his side of the story.

“I’ve been to several colleges,” Killens said. “I go into places and I want to talk to people because I’m tired of the other side [LGBTQ+ community] and calling us names just because we disagree.”

Regardless of how controversial his message was, Killens still didn’t violate the campus code and was able to remain on campus.

An email sent to students from Scott Crow, ARC’s public information officer, Thursday afternoon reinforced its stance on the subject, stating that ARC “has a responsibility to provide a space for constitutionally protected free speech, irrespective of the beliefs expressed in that speech.”

The message also added that allowing people with messages like Killens’ on campus “is not necessarily an indication of American River College’s values or views.”

It’s not the first time the question of protestor’s rights has come up on campus.

On Oct. 31, 2018, one protestor, whose message was similar to Killens’, violated ARC’s campus code by using amplified sound. The Los Rios Community College District’s Administration Regulation 1413 provides that “the use of amplified sound requires a permit in conjunction with these First Amendment activities so as not to disrupt other College or community activities.”

So as long as protestors abide by Regulation 1413, their freedom of speech right is protected, regardless of the message’s content. Although, network management major Isisdore Manes, argued that Killens’ protest was not in fact free speech.

While freedom of speech is an American right, UNITE staff members question whether that privilege creates a safe environment for LGBTQ+ students on campus.

Clar Gobuyan, contact for UNITE, said that something must be done to protect those who may have find these protests offensive.

“If there’s nothing we can do about the First Amendment right, and obviously there is isn’t, then we need to find funding and different resources to support students who are impacted and targeted by those protestors,” Gobuyan said.

While protests on campus are protected by the First Amendment, members of UNITE believe there are things that can be done to combat the message and take attention away from them, if that protest contains offensive and hateful language.

Roderic Agbunag, coordinator for UNITE, says that the group already has a process that they follow to comfort students who might feel offended or threatened by a protest on campus.

“We try to go out there and first check on students, make sure they feel like they’re supported if they feel like any of the [protestor’s] comments are triggering, and that they have support if they want to come to our offices to discuss,” Agbunag said.

According to Agbunag, UNITE and the Pride Center at ARC have worked together in the past to create their own “counter-protests,” which students can participate in to prevent the protestor from gaining an audience.

“I think at the end of the day, they want attention, they want an audience. So we try to counter that by saying, ‘hey, there’s other activities going on, and don’t give them attention, because the longer attention is given to them, the longer they want to talk,’” Agbunag said.

“I get where Los Rios stands on and where their fear is coming from because of the First Amendment rights and not wanting to get sued,” Agbunag said. “But I think if you look back at our value statements of equity and social justice, if we’re truly about being an inclusive environment for our students, then we should be upholding our values.”

Gobuyan is also critical of Los Rios’ free speech policy, and wants students to feel welcome so that they want to stay.

“One of the things we’re trying to fulfil here at ARC is the [improvement of] student retention rates,” Gobuyan said. “We want students in the classroom, we want them to be able to transfer out successfully and do well. But with things like hateful protests, how’s that going to happen? How are we going to make sure we’re cultivating a space for them that’s not only a comfortable environment but a safe one?”

The Equifax data breach may have put your identity at risk