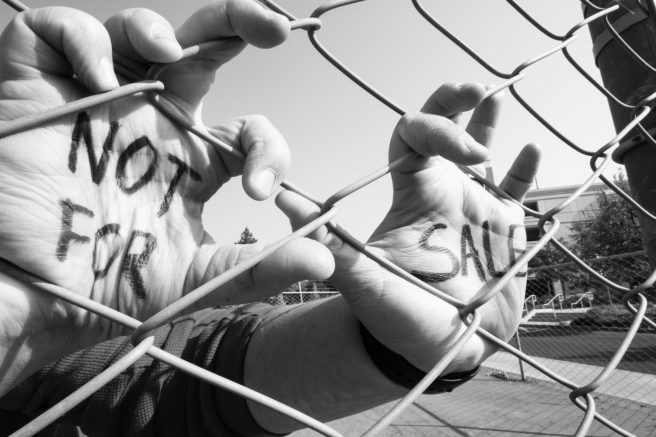 California leads the nation with cases of human trafficking in 2018. Everyone is at risk regardless of background, sex, age or race. (Photo illustration by Ashley Hayes-Stone)

At 18 and 19 years old, a couple struggled to find work in Boston. One day they found a Craigslist ad for work in Sacramento. They called the number and a man offered them an opportunity they couldn’t resist. The man added that if they didn’t like the job, he would get them tickets back to Boston.

“What do you have to lose?” the man said, and the couple made their choice. With the help of family and friends, they got tickets to Sacramento International Airport, where the man picked them up and drove them to a nice part of town. The car stopped. The man then gave them marketing materials and said “you will sell magazines door by door, see you in 10 hours.”

The couple tried to sell the magazines under the heat of an August day, but they couldn’t sell any. They asked for the tickets back to Boston when the man returned, but the man denied that such a deal existed and added they owed him $100 for the marketing materials.

This is the story that Rodger Freeman, an anti-trafficking trainer and outreach specialist at International Rescue Committee, told during a presentation on human trafficking at American River College on Oct. 18.

Human trafficking affects more than 20 million people worldwide as a modern-day form of slavery for labor or sex services. The couple of this story had that experience about 12 years ago. They contacted a social services agency at the time that helped them get back to Boston, Freeman said, but similar stories come up often, he added.

“This couple only had one horrible day, but there are some individuals that spend weeks, months or even years in a situation where it gets harder [to leave the situation],” Freeman said.

The IRC is a nongovernmental organization that “provides opportunities for refugees in America” in over 45 countries and 29 counties in the United States, including Sacramento.

According to Freeman, the National Human Trafficking Hotline (NHTH) is the most important resource for advocacy and help for victims of human trafficking in the U.S. Founded in 1933 by the U.S. Department of Health and Human Services (HHS) and operated by Polaris, a non-governmental organization, the hotline is available 24/7 by phone, email, text or virtual chat and in multiple languages to help victims, survivors and witnesses of human trafficking.

In a story published Aug. 1 by the Sacramento Bee, Caroline Diemar, National Hotline director for Polaris, said that they have addressed around 31 reports of labor trafficking in Sacramento over the past 10 years.

“That number isn’t necessarily representative of local labor trafficking rates, but rather reflects the number of victims who were aware of the National Human Trafficking Hotline and comfortable enough to dial it,” Diemar said in the Bee’s story.

As an ARC alumnus, Freeman shared that his time at ARC helped him to follow a career in social services and education.

He emphasized the importance of knowing how to identify and help someone when in doubt of a human trafficking situation.

“It doesn’t matter if you are going to be working on the law enforcement, school system, no matter your major,” Freeman said. “You might come across someone that is either currently being exploited or a passerby of human trafficking, so I would like you to have the tools.”

Freeman encouraged students to use the Action-Means-Purpose (AMP) model — outlined by the Trafficking Victims Protection Act of 2000 — which determines if a victim of human trafficking has been recruited, harmed, transported, or retained by a trafficker with the means of force, fraud or coercion for the purpose of extorting them for sex trade or labor services.

The list of potential indicators of victims of human trafficking is extensive but include the trafficker being in complete control of where the victim works, how much they earn, and handling their personal documentation. The victim may also have poor mental and physical health and are inconsistent with their stories. They may also be manipulated by force, fraud or coercion to work in commercial sex or labor services.

The NHTH clarifies that “initial consent to commercial sex or a labor setting prior to acts of force, fraud, or coercion (or if the victim is a minor in a sex trafficking situation) is not relevant to the crime, nor is payment.”

Freeman also advised the use of the word “survivor” rather than “victim” because “when you call them a ‘victim’, it doesn’t feel good and the word ‘survivor’ acknowledges to them that something has happened and yet it doesn’t define them as a human being.”

In an open discussion with students, Freeman clarified that everyone is at risk for  human trafficking, regardless of age, sex, race, sexual orientation, education, socioeconomic or legal status. When in doubt or in a situation of human trafficking, Freeman encourages students to call the National Human Trafficking Hotline for answers and resources at 1(888)373-7888.

Be the first to comment on "Human Trafficking: Modern slavery in California"