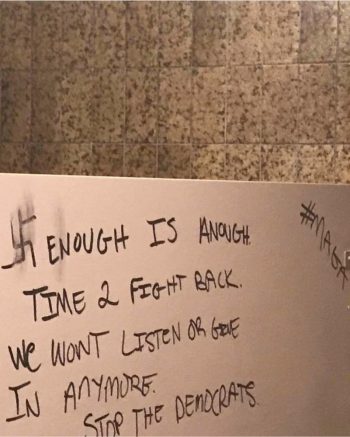 The Los Rios Police Department sent out a Rave Alert across the Los Rios District on Monday regarding a third incident of racist graffiti found on the Sacramento City College campus. The Rave Alert was sent out just before 3 p.m. through email.

The graffiti was found in a women’s restroom stall on the first floor of the Business Building at SCC, according to the Rave Alert.

On Monday Oct. 8, a swastika was found tagged on a bulletin board in the south gym at Sacramento City College.

The incident followed an incident of hate graffiti discovered in the men’s bathroom in Rodda Hall North at SCC on Oct. 1.

The college administration waited a few days to send out emails notifying students, faculty and staff in the first incident. This upset much of the SCC community because of the delay in notifying students and staff, as well as the delay to clean up the graffiti. The administration sent out an email on Oct. 8 regarding the second incident, launching efforts to improve “[p]rocedural flow to improve communication to students,” said Kaitlyn MacGregor, SCC’s communications and public information officer.

On Monday, UC Davis also reported an incident in which anti-semitic flyers were passed around, according to CBS 13.

“Hate has no home on our campus. Speaking up when you see something can help us build a safe campus community,” Gutierrez wrote.

These events raised questions at SCC and across all Los Rios Community colleges about when students should be notified of hate crimes and hate speech and how the administration decides if or when it is necessary to notify students.

Pamela Posz, a reference librarian at SCC, said she believes there should be a different process in place for reporting hate speech. She sent out an email to SCC faculty and staff Oct. 3. detailing her concerns.

“All of us need to take an active role in reporting hate speech. This should be the equivalent of mandated reporting for child abuse,” Posz wrote in the email.

Each year, along with all federally funded colleges, ARC is required to report crimes on its campus. The Clery Act, signed in to legislature in 1990, requires campuses to do so.

There were three reported hate crimes on ARC’s main campus in 2017, according to the report. These incidents consisted of one assault for sexual orientation and two intimidations for race.

Crow said it’s important for students and staff to report anything they see that seems off.

“See something; say something,” Crow said.

ARC has counselors to assist any students affected by the hate speech that has been circulating at SCC and UC Davis, according to Crow.

“We stand in solidarity with Sacramento City College,” Crow said.