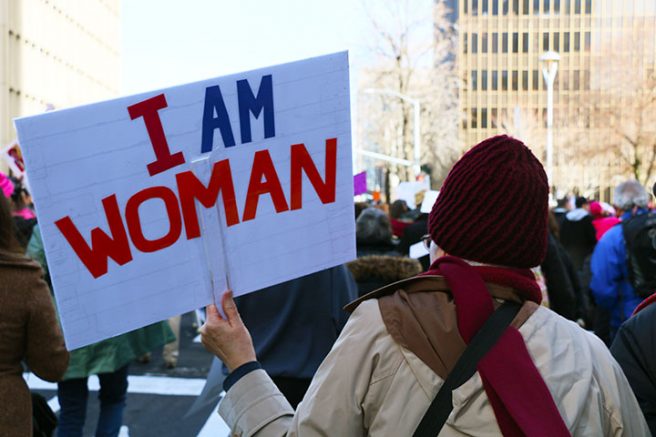 A woman holds up a sign at “Women’s March on Sacramento,” a nationwide peaceful gathering to show support for all marginalized peoples in downtown Sacramento in 2017. This year's march is expected to draw 20,000 people into the streets of downtown. (File Photo)

On Saturday Jan. 20, tens of thousands of people will flood the streets of Sacramento to participate in the 2018 Women’s March.

The march will begin at Southside Park at 10 a.m. and protesters will walk a predetermined route all the way to the west steps of the California State Capitol.

The march will be similar to last year’s Women’s March, which was partly held in protest to the election of President Donald Trump.

According to Xochitl Hermosillo, who is the youth coordinator and Instagram director for Saturday’s march, organizers are currently expecting over 20,000 people to show up, which would mirror last year’s numbers.

As of publication, more than 21,000 people have registered via the event’s Facebook page.

“From a feminist perspective this march means that there is still hope for the future of this country. This march is our chance to show what we are really made of, what we are truly capable of.”

Hermosillo also said that the march is meant to have a distinct meaning for all in attendance.

“From a feminist perspective this march means that there is still hope for the future of this country. This march is our chance to show what we are really made of, what we are truly capable of,” DeNecochea said.

“I hope that more men participate in the feminist agenda. This march is bigger than all of us. It is the path we pave for the future children of this country. How we treat our women defines who we are as a nation” DeNecochea said.

Hermosillo added that there is currently no expectation of counter protesters showing up to disrupt the day’s activities.

“”We are a friendly march, so hopefully it stays that way,” Hermosillo said.