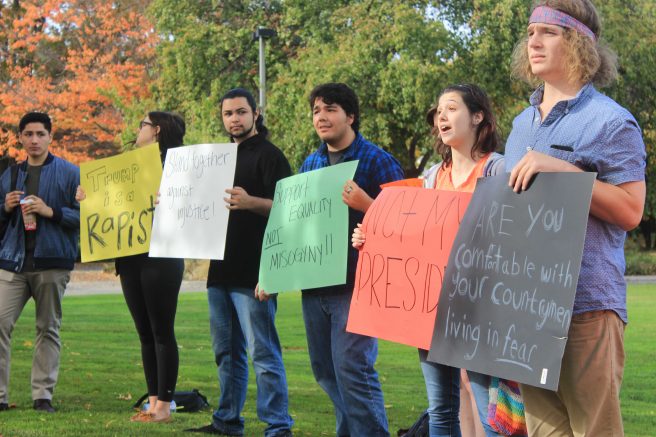 Organizer Julia Stimson (second from right) and other ARC students held a protest against President-elect Donald Trump in front of the ARC Library on Nov. 10. Many students gathered around the protestors, some even argued with the protestors for Trumps side. (Photo by Jared Smith)

A group of students with signs reading “Not my President” and “Go Frack Yourself” gathered in front of the library on Thursday to protest the election of President-elect Donald J. Trump.

Many student onlookers were gathered around the protesters and campus police were present to ensure a safe protest.

Organizer and ARC student Julia Stimson said she received an email asking her not to hold a protest.

Stimson said she is supporting everyone who is now fearful of what a Trump presidency may bring.

“How dare you,” she said of white women. “You shot yourselves in the foot. You literally sat there and you told an entire group of people that they don’t matter, that it doesn’t matter to you what their feelings are.” 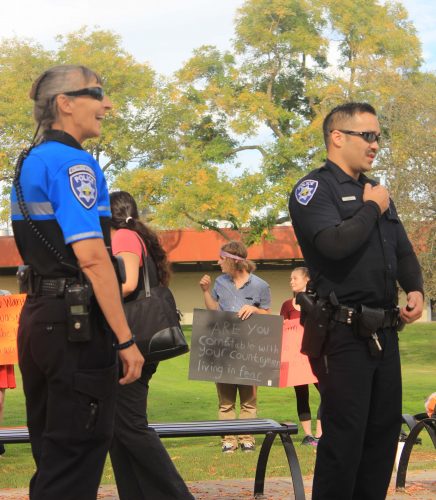 Campuis police maintain the peace at a Trump protest at ARC in front of the Library on Nov. 10. (Photo by Jared Smith)

Anthony Forzano, protestor and ARC student, is Hispanic and Italian and is concerned for his family members who are in the country illegally.

“I also have co-workers that are scared,” Forzano said. “One of my co-workers is actually in the process of trying to get some of his family into this country and that’s going to be really stunted by what’s happened.”

ARC student Nick Cardoza engaged in a conversation with Stimson during the protest.

Cardoza said in a separate interview that he can’t wrap his head around comments that claim Trump supporters have intentions to hurt minorities or women.

“All the Trump supporters I know are good standing, hard working citizens,” Cardoza said. “It’s sad to see (liberals) think the way they do about a large group of people (Trump supporters).”

Cardoza said that we have yet to see what will happen and that the protesters are thinking with their hearts and not their minds. He thinks that minorities should not be so worried about the future.

“If they follow the law, what do they have to be concerned about,” Cardoza said.

Another onlooker, Kassie Rivera, said she supported the protest 100 percent.

“I wanted to go downtown (to the protest) last night but I had to work,” Rivera said. “I’m scared for my friends, they can’t change their skin color.”