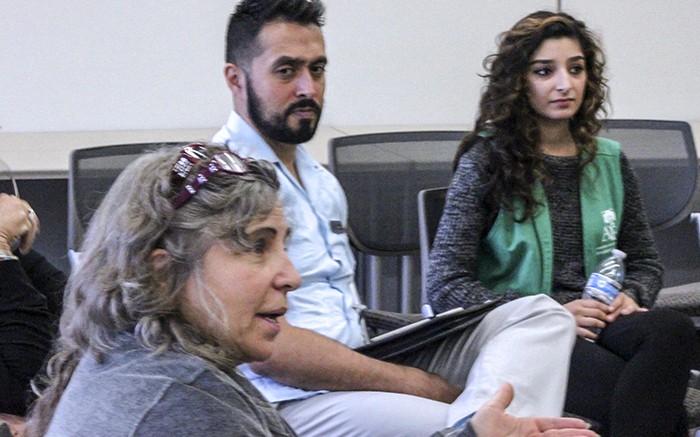 Students joined together in the community rooms of the Student Center Wednesday to dialogue about violence on campuses.

The Deconstructing Violence Brave Space dialogue, called in response to the Sept. 3 shooting at Sacramento City College, attracted a dozen students and was moderated by Manuel Perez, the dean of student development.

American River College student Kalynne Barnes said that two suicides at her high school changed the behavior of the student body, but only for a little while.

“After two weeks, the same people who were going out of their way to help were bullying people again,” said Barnes. “Be human. Go out of your way to tell someone you don’t usually talk to ‘how are you doing?’”

Lonnie Ayala, a first semester ARC student, said that he graduated from Columbine High School in Colorado three years before the shooting that killed 15 people at that campus in 1999.

Ayala said he went back from Sacramento to his hometown after the shooting, and that people in Columbine changed their attitude toward one another.

“At Columbine – after that had happened – everybody still cares,” said Ayala. “It’s like Whitney Houston. Before everybody said she was smoking crack, nobody wanted anything to do with her. After she died it was like ‘she’s such a treasure.’”

Nilo Nabavian said that students supported her when she was being bullied by a high school teacher.

“She (the teacher) called me a terrorist,” said Nabavian. “People in class I’d never even talked to said ‘you can’t let her treat you like that.’ It helped me gather confidence and courage.”

Perez announced that having a Brave Space dialogue at least once each month next semester is a possibility that is being considered by the Center for Leadership and Development.

ASB Sen. Laurie Jones attended the Brave Space. She suggested in an email Thursday that the center have a Brave Space workshop on the Holocaust, considering the recent comments of Los Rios Student Trustee Cameron Weaver that he doesn’t know if the Holocaust happened.

She said that a workshop “could be useful for students to express their feelings, as well as an educational talk” and that ASB adviser Juan Miguel Blanco “suggested broadening the topic to genocide in general.”

Accreditation to end with peer visit to ARC