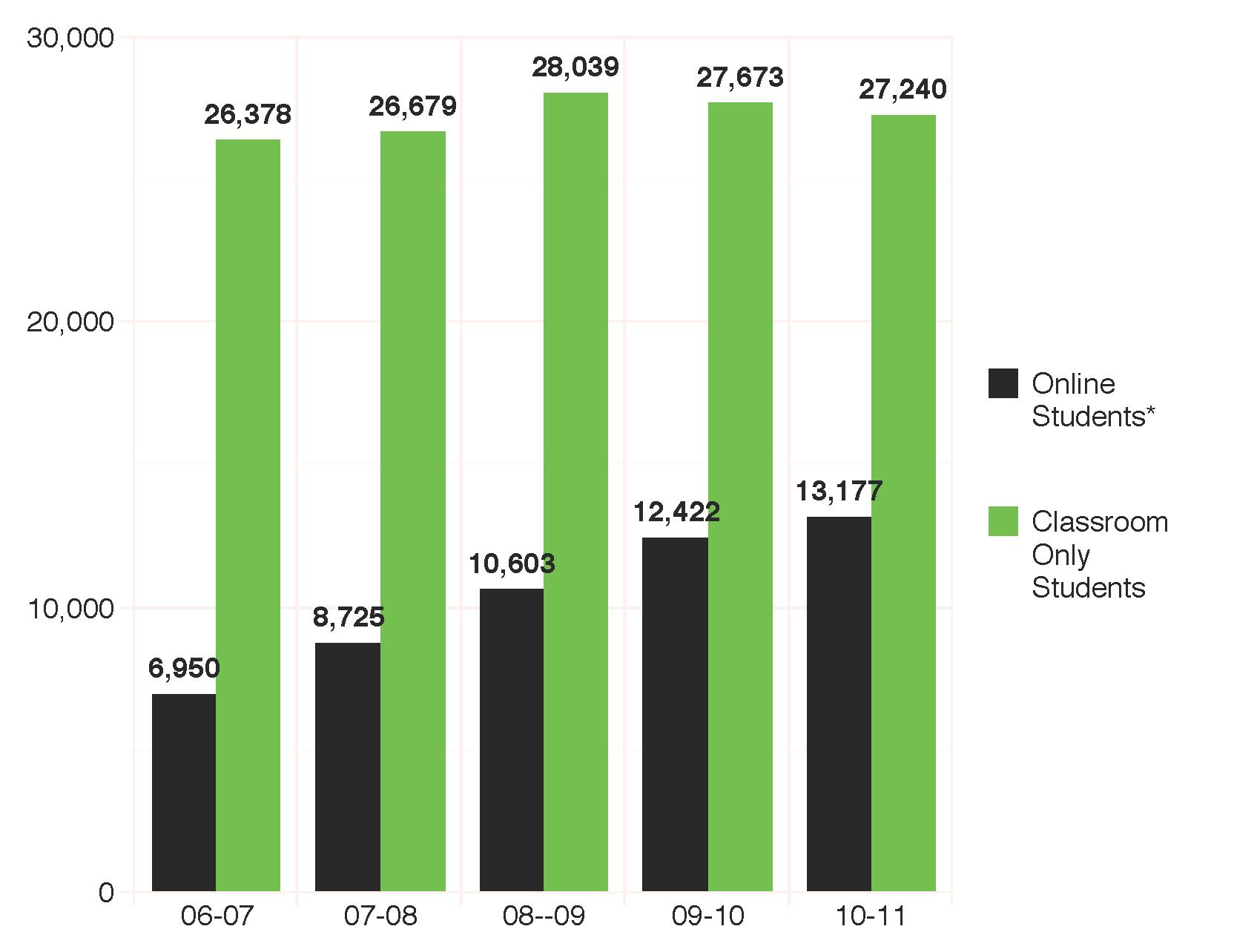 In other words, he’s the perfect candidate for online classes.

“[It’s] great,” said Pantera, a network administration major, about web-based instruction, otherwise known as “distance learning.” “It allows you to take classes you would not normally have time in your schedule to take.”

Just as other industries are shifting their offerings online, the same can be said for higher education, and ARC has been part of the growing trend. Online classes first became available at ARC in 2000. Initially, there were 27 courses offered. Today, there are 333, and last year more than 13,000 students enrolled in at least one online class.

Students like Pantera say that online classes give them more flexibility for when and where they receive instruction. Instead of having to come to campus for an 8:30 a.m. lecture, they can watch it online at 10:30 p.m. after work, when the kids have been put to bed.
But there is a growing debate in academic circles about the digital future of education. Is online instruction as effective as face-to-face instruction? What exactly is lost and gained by teaching in the virtual classroom?

In August, the Los Rios Community College District released a report comparing the success rates of face-to-face classes with online classes in English, math and business (success rate is defined as a student receiving a grade of A, B or C in the course). The report analyzed student success rates over a five-year period, and was the third in a series of studies examining the effectiveness of distance education.

While the campus figures were largely positive, they don’t account for students dropping the class before the census is taken. “There’s a very large drop rate between the time that students actually enroll in the class and by the time the census date (comes),” said Nancy Reitz, math dean at ARC.

“Taking an online course and mastering material is not easy,” said Dr. Derrick Booth, dean of business and computer science. “I think that students need to understand that distance education might represent the easiest way to take a class, but it’s not always the best approach.”

According to Reitz, it’s important that students evaluate whether an online class is best for them before enrolling. “Students really need to have some experience in both computers as well as the discipline and motivation it takes to do an online (class) successfully,” she said.

To help students decide whether online classes are a fit for them, ARC provides a checklist of qualities students should have. Students need to be organized, have good reading and writing skills, be proficient with a computer, have 10-15 hours a week to dedicate to the class, and be able to work independently.

Students interviewed for this article shared mixed feelings about their time in the digital classroom. While many liked the freedom and flexibility, others felt isolated from both their classmates and instructors.

Kristal Skidgel, who has taken several online classes at ARC, said, “On written assignments, (I didn’t) get feedback on the assignment, just the grade. So you really have no idea why you got the grade that you did.”

Student Louis Williams had a difference experience. “I had a good professor,” Williams said. “(He) was available when I needed him.”

According to Marsha Reske, distance education coordinator at ARC, there is perception among students that online classes are easier than traditional courses. This is not the case, however, because students have plenty of support on campus to increase their chances for success.

In 2000, ARC was the first in the Los Rios District to build a dedicated technology center. “There was a vision early on at ARC that instructional technology would play a key role in the future of education,” Reske said.

As part of her job, Reske runs the Online Teaching Institute, an eight-week class for faculty that includes instruction on how to effectively teach online, hybrid and web-enhanced classes.

“A lot of the deans, when they place faculty into an online class, they want to see that they’ve gone through our institute,” Reske said.

The absence of face-to-face contact between students and faculty is an undeniable component of distance education. “This is a different environment,” Reske said. “How can professors best engage their students when they’re not there? They can’t simply jump up and down or tell a joke in order to get a discussion going.”

However, Reske has been able to indentify techniques for creating a dynamic classroom atmosphere online — using video and discussion boards for example — so even though they can’t be in the same room as their professors, students feel that the instruction is still engaging.

In addition, many departments, such as English, require in-person orientation before the class moves online. “One of the things we do is we get a writing sample from the students in that face-to-face encounter, so that the instructor has something from the student and is familiar with their writing form from the beginning,” said Tammy Montgomery, dean of English.

In the end, the Los Rios report recommended the continued examination of online courses “before further expansion in the district is planned.”
It’s something that is already happening at ARC, where faculty constantly analyzes the performance of their sections, and online courses are no different.

“I think with education, no matter whether it’s face-to-face or online, you always assess,” Montgomery said. “You apply what you learned and then you re-assess. It should be a constant process if you really want to offer quality education to students.”

Ballers, Britches, and Buttondowns: From Cotton to Cool