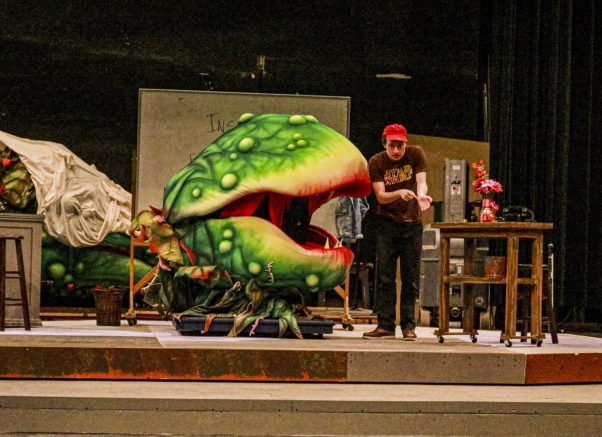 Ethan Mack, who plays Seymour Krelborn in the American River College production “Little Shop of Horrors,” rehearses a scene where he shows the place on his arm where her feeds his blood to the plant monster Audrey II, puppeteered by Fetalaiga Faga at the ARC theatre on Sept. 18, 2019. (Photo by Bram Martinez)

One minute you are head over heels for your co-worker who is unhappily taken and you’re a klutz at a failing business, the next you are feeding people to a giant man-eating plant whose size and growth is the talk of the town.

Is it worth it?

This is a musical about the meek Seymour Krelborn who pines for his unhappy co-worker, Audrey, as both work at a failing floral shop. This all changes when he introduces a fantastic plant that increases quickly in size, but alas, it hungers for flesh.  What are the lengths he will go to to keep his job and win her love?

The music was composed by Howard Ashman and Alan Menken.  Leading roles include theater arts major Ethan Mack who plays the titular character Seymour and theater major Kloe Walker, who plays the love interest Audrey.  The show is a horror comedy musical with romantic elements.

So the question of why Seymour associates himself with the ‘mean green mother from outer space’ remains simple.

“When Seymour discovers the plant, he discovers the key to leave skid row alongside getting wonderful things associated with it, but he reluctantly does what the plant asks, because he has to for Audrey,” Mack said.

But naturally, not only is it a show about people, but the other part is the man-eating plant, called Audrey II.

“People will be drawn to the show because of the mechanics of the plant and the look is so out of this world,” Mack said.

The plant is a series of four puppets, puppeteered mostly by theater arts major Fetalaiga Faga and partially by Mack. The puppets range from hand puppets to a giant mouth piloted by Faga.

“It’s different than I imagined, its weird like putting on a mask to become someone else, more so than say, being an actor, puppeteering is a whole different world,” Faga said.

Faga will also be inside one of the bigger puppets.

“It’s very simple, like a rowing motion in order to move the maw of it, although the last one is especially taxing because it is essentially working out the whole time,” Faga said.

The only major difference in this rendition of musical is a trio of urchins who will be performing, when originally they did not exist, Sylva added.

The cast remains hopeful that the musical will be well received.

If there is a lesson to be learned, Mack explains it easiest.

“Whatever you do……don’t feed the plant,” Mack said.

“Little Shop of Horrors” will run on weekends Oct. 11 through Oct. 27.  Learn more at arctheatre.org

Be the first to comment on "Little Preview of Horrors: ARC Theater brings puppets to the main stage"