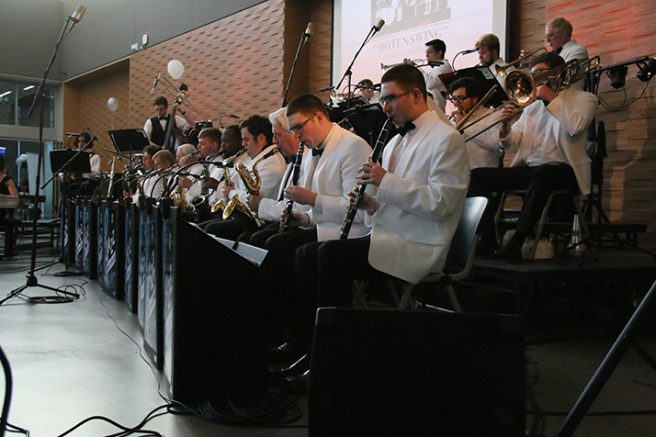 The American River College studio jazz ensemble performing the opening act for the "Tribute to the War Years" concert on April 26, 2018 (Photo by Michael Pacheco)

The American River College Studio Jazz Ensemble quietly moved from the back room to their places on stage. They opened with the classic Count Basie piece “Moten Swing” for the sixth annual Tribute to the War Years concert on April 27.

The concert is held every spring semester as a way to honor ARC’s veterans, who were able to attend the event for free.

The Student Center was converted into a dance hall for the event, with the concert taking the style of a United States Organization show,—live performances that often take place near combat zones as a way to boost troop morale.

After the first song, the conductor Dyne Eifertsen introduced the band and segued into the next piece, an original tune entitled “Leaky Spark Tube” written by band member, Jarod Wheeler.

Following that was a short Glenn Miller set with the band performing “Little Brown Jug” and “Pennsylvania 6-5000.”

This was followed with an Armed Forces Medley, which combined the theme songs for the different US military branches. While the song was performed, veterans of the different branches that were present in the audience stood up when their song came up.

Next was a vocal set starting with the Sammy Davis Jr. version of “Can’t We Be Friends,” and followed by the Frank Sinatra versions of “They Can’t Take That Away From Me” and “Fly Me to the Moon.”

After an intermission, the ARC Latin Jazz Ensemble performed the next set, starting with Jose Rizo and Francisco Torres’ “Sun God” followed by “Nadie Como Ella” by Marc Antony. Audience members began to take to the dance floor during the latin jazz set.

Saxophonist Steven Sharp, who plays for the Latin and Studio bands, said he appreciates the audience interaction, which tends to seldom happen during music events at the school.

“Everyone coming out and dancing and having a good time helped me feel that the crowd enjoyed the music and got into it,” Sharp said. “That was a really big moment for me.”

The next song performed was “El Molestoso” by Eddie Palmieri. The Latin Jazz Ensemble wrapped up their set with Elvis Crespo’s upbeat “Suavemente” where at this point, a third of the audience was on the floor dancing.

The next group up was ARC’s premier jazz combo, the Jazz Collective, opening with an instrumental version of Luis Demetrio’s “Sway” and “Wave” by Antonio Carlos Jobim.

The last two songs performed by the Jazz Collective were Duke Ellington’s “Sophisticated Lady” and “Stompin at the Savoy” by Benny Goodman.

The last set for the evening shifted back to the studio jazz band, this time featuring ARC’s own version of the late Andrew Sisters, featuring student vocalists Daletza Benitez, Jenna Magaziner, and Serena Chao.

The set started with the Bing Crosby version of “Don’t Fence Me In” followed up with “Shoo-Shoo Baby” and “Don’t Sit Under the Apple Tree.” The last song for the evening was the popular “Boogie Woogie Bugle Boy.”

At the end of the concert, Eifertsen noted how the ensembles performed the best that they had in a long time.

“The students just got into the vibe of the evening, getting into the performance aspect,” Eifertsen said. “They bought into the entertainment factor, and got the people to dance and just have fun.”

Opinion: ARC students should interact with people of different cultures