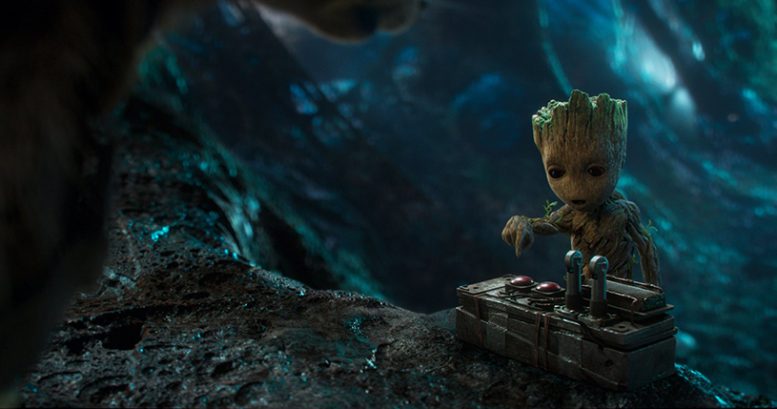 Baby Groot messing with a bomb detonator. (courtesy of IMDB)

The team is back and funnier than ever before. James Gunn, the director of this two hour and 16 minute sequel proves to be a true master mind when it comes to enthralling his audience through emotions.

One thing noticeable in “Guardians of the Galaxy Vol. 2, “ which was also present in the previous one, is its music choice.

Gunn seamlessly blends the nostalgia of an old school rock and roll soundtrack with the concept of huge advancements in technology, different galaxies and interdimensional beings.

From an unforgettable intro, to a plot twist that seems almost too good to be true, this film has it all.

One thing that is evergreen throughout the film is the amazing humor that each character radiates.

Drax (Dave Bautista), an immensely strong beast from one of the many planets within the Marvel Universe stole the show when it came to making the audience laugh out loud.

With a misunderstanding of sarcasm, a terrible way of being civil when it comes to delicate matters and brutal honesty, Drax had everyone in the theater howling.

Another character that proved to be leaps and bounds ahead of the others, although he only has said the same phrase throughout both films, is Groot (Vin Diesel).

Baby Groot, who in this film is an adolescent version of his previous self, sticks to the audience’s heart by using his adorable ferocity in combat along with his clueless attitude when it comes to life or death situations.

When this film is officially released it’s following will increase by the thousands, Gunn has returned with the Guardians by his side to showcase a true and unique masterpiece to the world.

Be the first to comment on "Guardians burst into theaters"