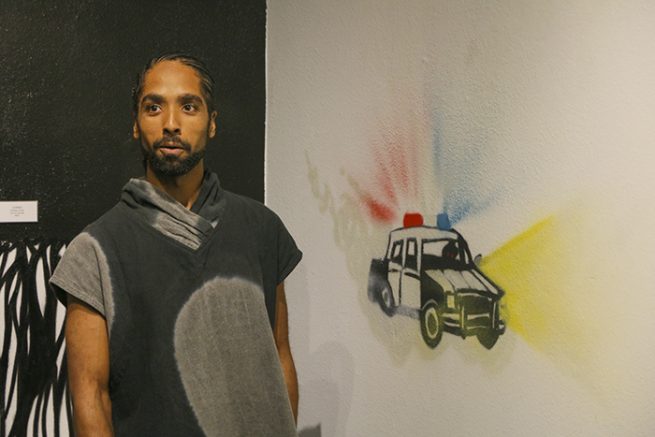 Artist Unity Lewis explains to a crowd of onlookers the meaning behind some of his murals in the Kaneko Art Gakllery at American River College on Oct. 11 (Photo by Luis Gael Jimenez)

The Kaneko Art Gallery hosted a reception honoring the work of artist Unity Lewis on Tuesday.

Lewis has been covering the walls of the Kaneko with murals and turning the gallery into a home away from home.

White also praised his ability to bring in students who “would not usually come into an art gallery.”

Bastida also said, “I couldn’t be happier with the way things turned out. The reception is going great.”

Art and art new media major Miguel Miranda said, “It’s insane how he projects himself into his artwork. He’s always himself, and his art shows that.”

Throughout the event, Lewis met with guests of the gallery and answered whatever questions they had. He also signed autographs for people who bought copies of his CD, “7th Dynasty”. 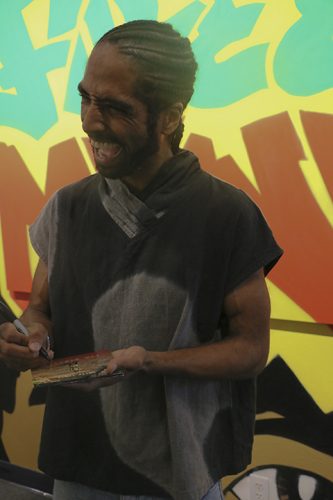 Lewis finished the night by picking up a microphone and turning the Kaneko into an impromptu concert venue by rapping two original songs.

After Lewis put down the microphone, White said that whether he [Lewis] knew it or not, “He’s part of our family now. He will always be welcome back at American River College.”

When the reception came to an end, Lewis hosted an after party at the Oak Park Brewing Company where members of the art club did live art and ARC student John Klaiber organized an open mic show.