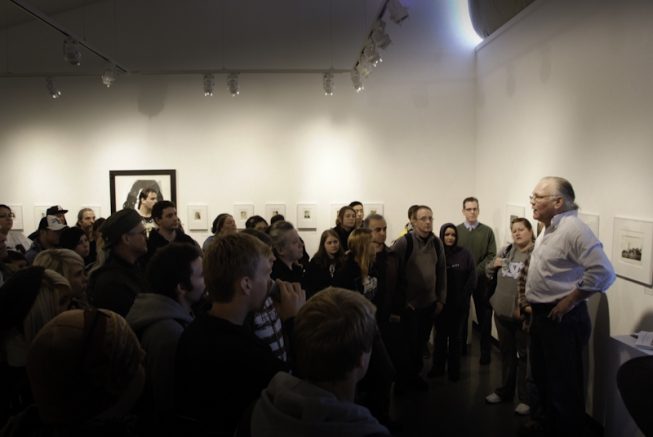 A crowd packed into the James Kaneko Gallery, during the last Andy Warhol exhibit on March 13, 2012. The new “Six Days of Andy Warhol” exhibition begins on Saturday. (File photo)

The work of a pop culture icon is coming to American River College ‒ and it’s so much more than just Campbell’s soup cans.

At least 30 Andy Warhol original photographs and silk screens will be on display at the James Kaneko Gallery at American River College starting Saturday, according to gallery director Patricia Wood.

The “Six Days of Andy Warhol” exhibition begins with a reception on the first day from 4 p.m. to 6 p.m. and will run until May 19. The gallery will be closed Sunday.

According to Wood, there will be about 27 photographs and five silk screens at the gallery.

All the Warhol works belong to ARC’s permanent art collection, and were gifted to the school by the Andy Warhol Foundation for the Visual Arts.

Wood said that ARC is the only community college to have received Warhols from the foundation.

“They’re finally showing something that’s been hidden for so long,” said ARC art student Blanca Bastida. “It’s a treasure for our school.”

Bastida said the show will give students a chance to see something that’s an “inspiration.”

“I’ve never seen any of them,” said gallery student Max Marchol. “I’m excited to see it.”

While uncommon for a Kaneko Gallery exhibition to begin on a Saturday, Wood says she hopes that the event will help draw people to the school and encourage visitors to go downtown for Second Saturday festivities to support art students.

Several students from the American River College art club are being featured in a student show at the Red Door Art Studio gallery on Second Saturday at 5 p.m.

The Kaneko gallery also closed their most recent exhibition, the annual student art show, with a reception and awards ceremony on Wednesday.

ARC musicians use jazz to put a twist on the Beatles