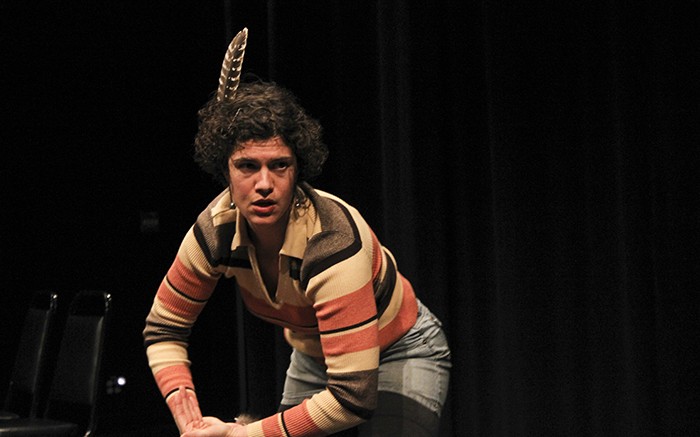 Kristine Aubert performs a monologue that was dedicated to two American River College student Andrew Downs-Hoover and Jenna Faeth. Downs-Hoover and Faeth died in a car crash in 2008. (Photo by Joseph Daniels)

A monologue dedicated to the memory of members of the theater department who died in a car crash in 2008 was featured at the Cafe Noir at American River College on Wednesday.

Cafe Noir is an open-mic event that allows students to perform in front of a live audience.

Kristine Aubert performed a monologue from the children’s book “Ashes, Ashes” by Etienne Delessert. Aubert dedicated the monologue to Andrew Downs-Hoover and Jenna Faeth, who died in a February 2008 car crash.

Downs-Hoover was the son of ARC theater professor Pamela Downs.

Aubert performed in a play with Faeth titled “Pieces of My Heart,” which was produced by the ARC theater department just a few months before the crash.

“(Faeth) was one of the most naturally gifted young women I have ever worked with,” Kristine said. “She was really just innocent, pure and beautiful.”

Aubert said she read “Ashes, Ashes” to cope with the loss of Downs-Hoover and Faeth.

The two were coming back from a theater festival at California State University, Los Angeles when the crash occurred, according to The Sacramento Bee.

A poem about participating in a fight club and a song that tells the story of a man singing his apology for losing his friend’s bike were also featured at the event.

Jareth Thomas read some of her poetry, which included “Love Like Bloody Knuckles” and “Little Lady.”

Thomas said she joined a “fight club” with her friends after a breakup.

“We get together for a couple hours and then we go play (Dungeons & Dragons), so it was a weird, weird set up,” Thomas said.

“Little Lady” is about how Thomas identifies as genderqueer. Genderqueer described individuals who do not identify with a gender.

“I had a friend of mine after I came out, a father-figure, a mentor, said he wasn’t going to use my pronouns,” said Thomas. “I shouldn’t be upset if people called me little lady, because that’s how life works, and if I looked like a girl, I should be expected to be treated like a girl.”

Nick Unquera performed “The Apology Song” by the Decemberists and “the Wedding Gown” by The Pine Box Boys.

“It was kind of a charming idea for somebody to write an apology song after they got their buddy’s bike stolen through their carelessness,” Unquera said. “I like songs that tell stories.”