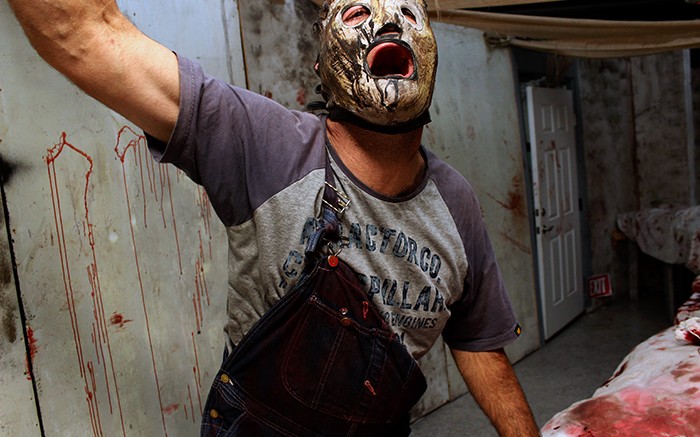 Jason Becker, a cast member of Slipknot's Scream Park warms up moments before the doors opens to the public. His costume was inspired by the outfit of Corey Taylor, the lead singer of the American rock band Slipknot. (Photo by Joseph Daniels)

The audience members are greeted by the heavy metal music of Slipknot as they make their way to the entrance of Slipknot’s Scream Park, a Halloween attraction that features three haunted house exhibits inspired that is inspired by the imagery and songs of the rock group.

The band became popular after releasing its eponymous album in 1999.

Slipknot is distinguished by the elaborate costumes and masks the group wears during its performances.

Slipknot’s Scream Park is designed and run by Fear Overload, a company that hosts haunted house events in Sacramento and San Francisco. The events takes place for 20 days in October.

Slipknot approved the band’s likeness to be used in the production of the haunted house.

Some of the cast members of the haunted house can be found wearing costumes that are similar to the band’s.

Jason Becker, a cast member who wears a mask that is very similar to the face of the lead vocalist of Slipknot, Corey Taylor, said that some audience members have lost control of their bodily functions while navigating the haunted house.

“It’s like walking through a living Slipknot cover,” Becker said.

Phil Roland, the event manager, said he believes the reason why people are attracted to haunted houses is because they want to explore the unknown and strengthen their nervous systems.

“Not everyone could bungee jump or cliff dive,” Phil said. “This is kind of like a small step in that direction.”

A man’s face covered with wounds and a woman covered in blood, emerging from a bathtub, are some of the characters featured in the haunted house.

Michelle Roland, the makeup manager, said that realism influenced her motivation on how to create makeup for the actors.

“When I try to do blood dripping, or the lady that I had that looked like she was burned by barbeque grill tonight, I tried to make it look (as real as possible),” Michelle said.

Halloween is a satisfying scare, according to ARC professors