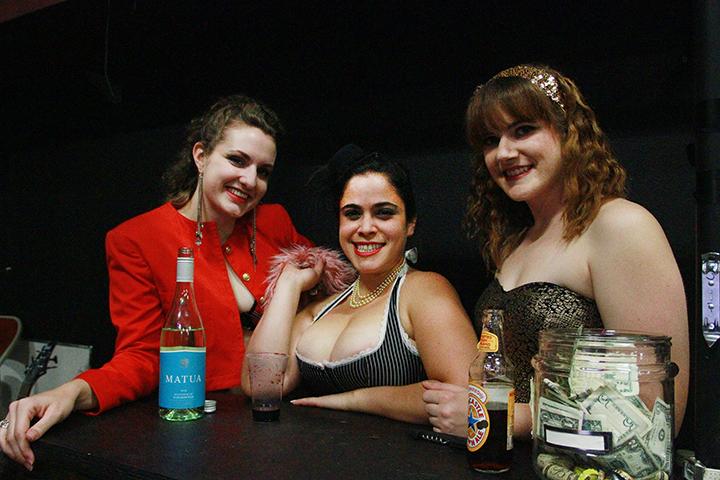 It was astounding. Time was fleeting. Madness truly took control.

Green Valley Theatre presents their fifth production of Richard O’Brien’s “Rocky Horror Picture Show” (RHPS). After previous productions performed in the styles of Hammer Horror, Steampunk and Southern Gothic (think “Beautiful Creatures”), to name a few, this year they present the cult classic with a German Expressionism aesthetic taking cues from classics such as “Metropolis.”

The stage is stark and sleek red, black and chrome. A trio of projectors incorporates both pre-recorded and live film into the performance. Instead of a tank or table, Rocky is brought out on a frame of pipes.

Watching the movie is “just masturbation,” director Christopher Cook said. You definitely need to see a live performance. Prior to the start of the show, the Rocky “virgins,” the audience members who have not before seen RHPS live, are brought up to the stage to be properly initiated, publicly and with great humiliation. A crew member in red coat and leopard panties over fishnets walks down the line, drawing scraps of paper from a hat, and making each virgin make the “sex noise” of the animal written on the scrap of paper. Many are nervous and shy; some are game and jump at the chance. All are good sports. As virgins make the noises, another crew member draws a large “V” on their foreheads in red lipstick.

The Green Valley Theatre performs Rocky Horror Picture Show with a practiced frenzy. The simulated sex acts are energetic and spasmodic. They also make the characters their own.

Craig Howard’s Frankenfurter eschews the curly wig and tattoo of Tim Curry, opting instead for a short spikey ‘do and bare arms. Rather than Curry’s diva mad scientist, Howard plays a Frankenfurter of manic malice who oozes transgressive sex appeal like Eddie’s corpse oozes blood.

Ryan Allen’s Riff Raff is more a sassy diva trans woman than Richard O’Brien’s creepy, Lurch-esque handy man. He makes you believe that he came from the same world as Frankenfurter rather than being some zombie or frankensteinian creation.

Jonathan Reinhart-Cranmer’s Rocky visually puts one in mind of Chris Evan’s Steve Rogers/Captain America, especially when he dons M1 army helmet and combat pants for Frankenfurter’s floor show. When I heard the first strains of Sword of Damocles, I lamented that such an amazing voice was relegated to a role which hardly speaks, and then was delighted to see that he has more lines in the play than the movie.

The performance was wonderful. The cast and crew’s experience and talent shows through and through.

The Green Valley Theatre Company presents “Rocky Horror Picture Show” for another week in sold out shows on Oct. 25 and 26 at 8 p.m. and midnight, and one final night of the season on Oct. 31 at 8 p.m. Tickets for Halloween night can be purchased at www.greenvalleytheatre.com for $18. The show is restricted to ages 18 and up. The theater is downtown on V street across from UC Davis Medical Center.

The cost of console gaming is “too damn high.”

Act for the freedom of information

Be the first to comment on "You will shiver with antici…(say it!) …pation!"