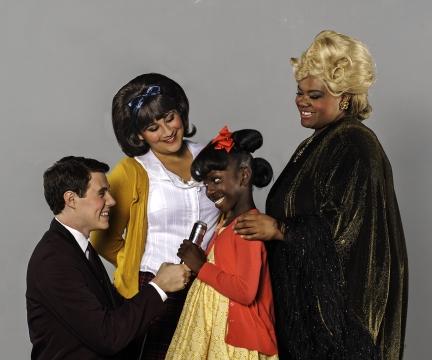 As Wilbur Turnblad (played by Keith Riedell) says to his daughter Tracy, “You gotta think big to be big.” And big might be an understatement. The ARC Theatre program kicked off the fall semester with the Sam Williams-directed “Hairspray,” and the kick was mighty powerful.

From the opening number, “Good Morning Baltimore,” to the closer, “You Can’t Stop the Beat,” “Hairspray” is a musical that never forgets what it is about. Using the cheery facade of early 1960s Baltimore, “Hairspray” tackles an issue true to the setting: racism. “The Corny Collins Show,” a local dance show aimed at selling hairspray to teenagers who tune in to learn the newest moves, advances much of the plot.

Two of these teenagers are main character Tracy Turnblad (high-school senior Anna Russell), and her best friend, Penny Lou Pingleton (Sarah Richard). Tracy wants to be on the show and become a star, but wouldn’t mind also being able to meet Link Larkin (Brennan Benoit), the “teenage Elvis” character of the program.

The whole cast, an impressive 45 people, kept the stage full as they were spot on with their dancing and singing, the result of five months of rehearsal. The choreography was done by Williams and his daughter Sarah. Nicole Royster stood out in what was arguably the show’s knockout performance as Motormouth Maybelle, the host of Negro Day, the only day where black kids are allowed to dance on “The Corny Collins Show”.

Royster said after opening night, “The audition was the most intense audition I’ve ever been on in my life. I’ve never worked so hard to get something like this, and it’s amazing to be a part of.”

Valerie Steward-Williams also stood out as Tracy’s mother Edna Turnblad and was a notable casting decision, considering that the role is traditionally played by a man, most recently by John Travolta in the 2007 film remake.

But most of the heavy lifting was done by Russell. She was on stage for almost the entire show, showing natural singing and dancing skill, and nailing every joke. She has a natural charisma and confidence as a performer that shined throughout.

Hairspray runs Thursdays through Sundays until Oct. 27. For ticketing information call (916)-484-8234 or go to arctheatre.com

New faces means a new scheme for this year’s squad