How to do Thanksgiving on a student budget 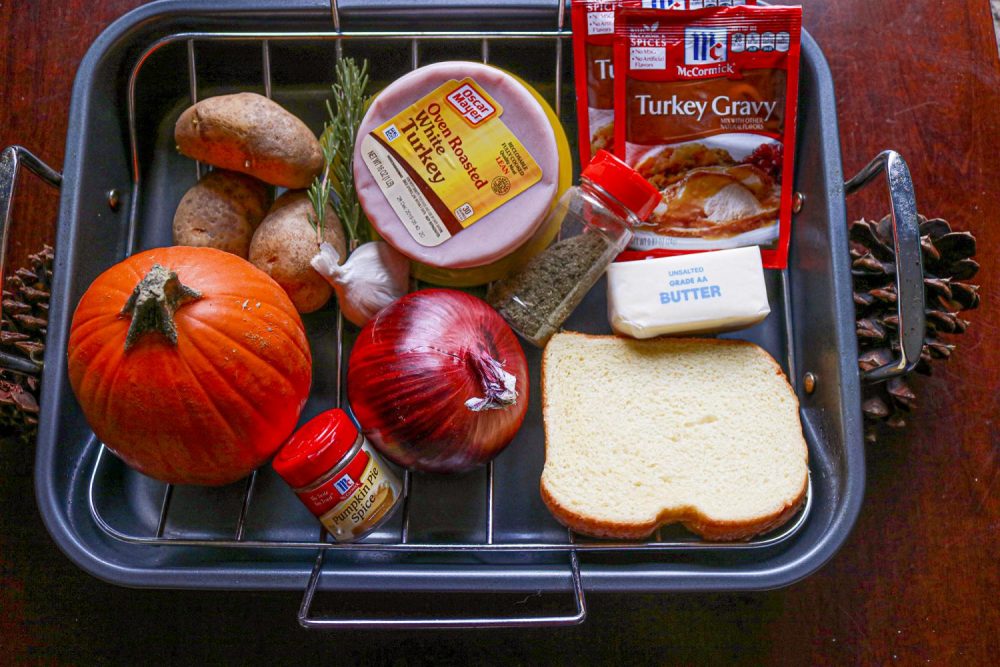 People who are planning on making a Thanksgiving feast on a budget shouldn’t sacrifice quality for cost. (Photo illustration by Bram Martinez)

Thanksgiving is approaching quickly and some people are still in doubt what they could be doing for the holidays.

Some people may be invited to Thanksgiving events by friends or family and some people won’t celebrate. Some may be hosting, celebrating by themselves or asked to bring a dish. Since it’s close to the gift-giving holidays, there may be a short term budgetary crisis on some people’s wallets, and they are forced to miss various dishes on Turkey Day.

However, there are a few solutions to alleviate the financial stress on Thanksgiving. Between sales and comparing prices at rival stores, eaters are sure to find ways to save money on food. Stores will compete more around this time in order to get more customers, so they will slash their prices to combat each other.  Assistance from the American River College food pantry, and other food banks is also available.

The best way to save money is to find cheaper ingredients for meals, compare what shopping options are available, possible alternatives (healthier or substitute), and save leftovers for future meals.

If you plan to have mashed potatoes on your Thanksgiving table, the cheapest place to buy potatoes, milk and butter ingredients is Winco Foods. In case all of this is too expensive, instant mashed potatoes from various brands are far quicker and cheaper. The potato flakes in general are cheaper and just as good as long as the directions are followed.

Gravy is a simpler matter. It is essentially a roux that can be made of giblets, drippings and flour. The pre-packaged mixes cost less than a dollar, and the gravy sold in jars just needs to be heated.

Stuffing can be bought pre-made or made from scratch, and both methods cost around the same, which averages about $5 to $8. Cranberries can be bought for one to two dollars in a 14-ounce can, or fresh made with bagged cranberries ranging $1 to $3.

Now for the main dish, the turkey. The first thing to remember is how many people are being fed. A 30-pound turkey might be excessive for just two people.

Turkeys are priced by weight the average is 89 cents to $1.39 per pound in California according to the American Farm Bureau Federation, but there are also some stores (Winco, Wal-Mart, Smart and Final, Costco, Sam’s Club) that cut prices so keep an eye out for lower than average prices.

If someone is eating by themselves they do not necessarily need to buy a whole turkey, instead they can just buy turkey parts such as legs, breasts, etc. for a fraction of the price.

If turkey isn’t your thing, alternatives are numerous. There are other meats that are easier on the wallet such as chicken, and cornish game hens. There are also alternatives for people who do not eat meat, such as Tofurkey. Whole Foods Market, Inc. offers a vegan holiday meal for two (a main dish, three sides and a dessert) for $40.

Finally, it’s not Thanksgiving without pie for dessert. Pie can be expensive but there are premade crusts and pans which sell for around $2.50. A whole pie can be bought premade from a grocery store for $3 to $5.

Whipped cream fresh made is impressive, but is expensive if the right tools aren’t available, and it could go bad. The price of canned whipped cream varies based on content, size and quality, but the total range is $2 to $5.

“They can use the food pantry in the pop-up distribution to pick up things like canned pumpkin to make pumpkin pie,” Radu said.

The Beaver Food Pantry gets deliveries of fresh produce from the Sacramento Food Bank. The pop-up distributions occur every second and fourth Wednesday.

“We also have the makings here for turkey gravy here at the pantry, and other baked good items,” Dienst said. “The River City Food Bank, [gets its] distribution of fresh produce every Thursday. We also get deliveries from the Sacramento Food Bank.”

According to Dienst, if someone is a recipient of CalFresh, you can use your benefits at any farmer’s market.

Remember to always shop sales and keep budget in mind. Now utilizing these methods, a cheaper Thanksgiving can be obtained without lowering the quality.