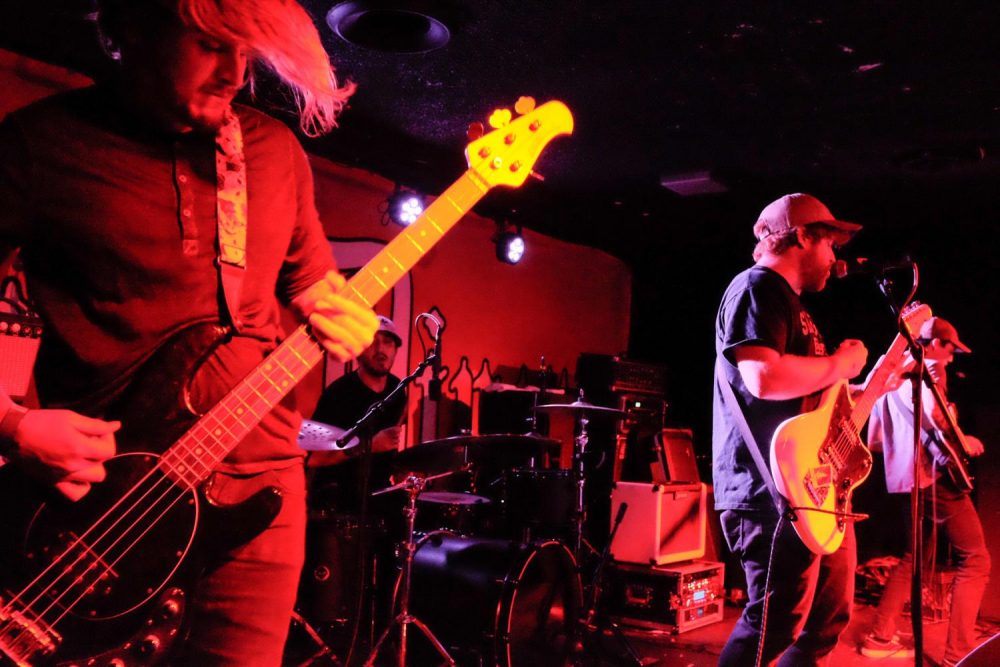 Demon In Me features (from left to right) ARC alumnus Julian Grenz, drummer Ciro Abraham and singer guitar player Kylle Reece, during a show at Holy Diver in Sacramento on Sept. 23. (Photo by Patrick Hyun Wilson)

Musical instruments sat in the snow on the side of a Wyoming highway. The sun began to set over the icy tundra as the group of men waited in the freezing January wind. A drum set and guitar were destroyed and the rest of the equipment was exposed to the open air through the ripped side of the trailer.

The band’s debut tour was cancelled and their gear was trapped in impound. Demon In Me was left in limbo.

It wouldn’t be the last time Julian Grenz and Demon In Me would face setbacks on their journey from the backyard bands that formed their dedication for music. The band hasn’t let the obstacles of the industry — or the weather — stop them from pursuing their passion.

A bassist in the backyard

It’s been two and a half years since the accident and Demon In Me has only just paid off the debt it caused. Grenz, the band’s bassist and American River College alumnus, has maintained his passion for the music scene since he started learning bass guitar by playing in bands that never quite escaped the backyard.

“I didn’t think about it as a career. In the ideal world, I was going to be a rock star,” Grenz said.

Throughout the early years of his musical life, he learned through a workshop offered by Skip’s Music, a store that offers lessons for young musicians in Sacramento. He played in the store’s annual Stairway to Stardom event, a multi-day musical workshop in which professional musicians teach students to play with bands comprised of other students in the workshop.

Grenz says he used tools he acquired at ARC — including his commercial music degree — to craft his future in the music industry.

“I took a business law course,” Grenz said. “It taught me how to look at contracts, see how they’re developed and what they can mean.”

Currently he works two part-time jobs, as a booking assistant at Artery Global and at Ace of Spades, a Sacramento music venue, playing in Demon In Me as often as possible. Working different jobs in the music scene has given him insight to the inner workings of the industry itself from small venues and bands, to larger performances.

“People see it as this competition sometimes, and that’s just not true,” Grenz said. “People coming out to shows more helps everyone.”

Kylle Reece began Demon In Me as a hard rock band in the style of Thrice and Taking Back Sunday in San Jose. The band was in its early stages when Grenz and Reece noticed each other at shows they had each played.

“I needed a bassist [for the first] tour,” Reece said. “He stuck his neck out and said ‘I want to do this’ so we went on a tour and he ended up joining the band as a permanent member.”

Playing show after show, Grenz realized that he couldn’t push himself to the extreme every night. He was forced to learn how to deliver consistent performances over the three week tour.

“When you’re playing every night you have to learn ‘what can I do, what’s too much, what’s too little,’” Grenz said.

Their tour took the band through the midwest over the course of three weeks, eventually leading to a show in Salt Lake City, Utah. The direct route to their next show was shut down, forcing them to go through windy Wyoming in order to make it to their show on time.

“The trailer we were using was a little too lightweight for the conditions we were in; the wind picked up,” Grenz said. “The trailer ended up flipping … We were all okay so that was a nice thing.”

Demon in Me ended up missing the final few shows of their tour and were left stranded in the middle of Wyoming with a destroyed, uninsured trailer. Friends and family came out in support, creating a GoFundMe page to help them pay off the damages. Bands including The Mighty Guys and Movements began to share the page, attracting more attention to Demon In Me.

“It was honestly really touching,” Grenz said. “I don’t think [we] understood the severity of what happened at the time. We were very lucky no one was hurt.”

Here’s your way out

Grenz returned to classes at ARC following the tour. The trauma of the incident caught up to him one day on his way to class.

“I was sitting next to a bunch of cars [at Winding Way and Walnut Avenue] and I realized I was just terrified of being in a car right then. I pulled over and had to sit there for an hour trying to calm myself down,” Grenz said.

A brush with serious injury or death during a tour could cause a person with less resolve to quit entirely, but his fear didn’t hold Grenz back; in less than a month he was ready to go back on tour.

For their next tour they picked up drummer Ciro Abraham, someone Reece had met in their hometown of San Jose.

“My old band was in the process of sort of fading out, they were getting married and having kids,” Abraham said. “[Reece] said: ‘Hey I need a drummer for this next tour do you want to be my drummer?’ I was like: ‘Yeah sure, I got nothing else to do,’” Abraham said.

On Sept. 2 the band released, “Here’s Your Way Out” through Standby Records, a North Carolina based record label that signed the band. It was a big step for the band’s future but they were unaware at the time that it would be the only album they released with Standby Records.

“It was a lot of exactly that: standing by, waiting for something to happen,” Grenz said.

The record label had left the band in limbo again. Demon in Me waited for word from the label for months with no signs of change.

In May of 2018, the members of Demon In Me decided to buy out of their contract to go independent. Reece paid out of pocket to free the band from the stagnant record label.

“The industry is so full of rules, ‘Yes do this, don’t do this,’ that you kind of get caught up in trying to play by the rules that everyone is playing by,” Grenz said.

Going independent has created new obstacles for Demon In Me. Grenz is forced to use his experience as a booking agent and the skills he learned at ARC to learn the business of the music industry on the fly.

Demon In Me is taking advantage of streaming services like Spotify and Apple Music which allow artists to publish their content independently.

“We just released our first single on Spotify [since leaving the label] and it’s done better than anything we’ve done before,” Grenz said.

The possibilities are within their grasp and Grenz’s mother, Vicki, thinks their trust in each other will carry them through.

“They take it very seriously and they respect one another,” she said. “They’re dedicated to the work.”

Demon In Me embarked on their longest tour to date on Oct. 5 from Placerville to Salt Lake City, to Brooklyn, ending with a show at the Naked Lounge in Chico on Nov. 15. Grenz will be there, giving it his all, every night.

“It’s success through failure,” Grenz said. “If you stop that’s on you.”