Up in smoke: the last days of the ban on marijuana 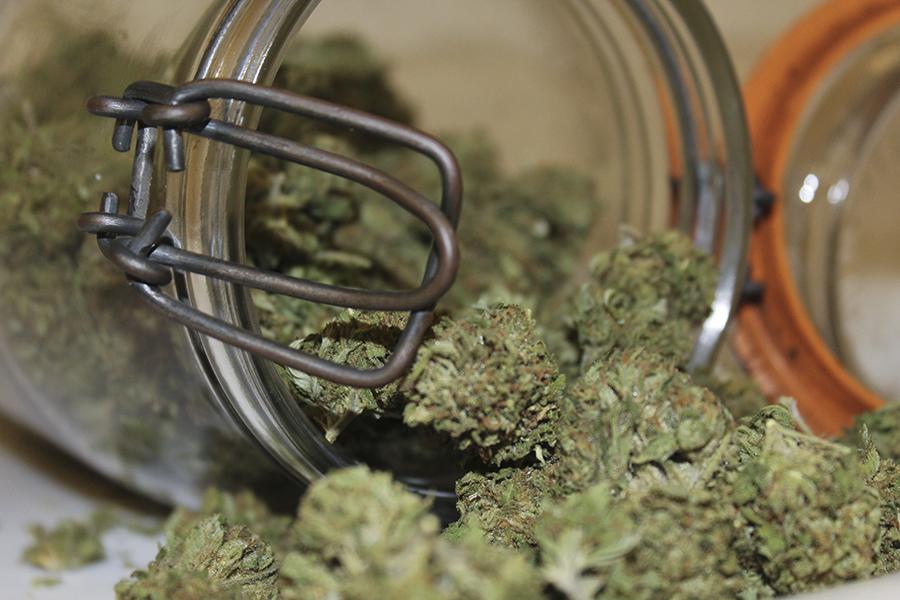 In spite of the fact that it is now possible for people to buy marijuana from a clinic, there are still some who rather get their product from the black market. (Photo by Robert Hansen)

Army veteran Nick House began smoking marijuana in high school with friends, then quit when he joined the military at age 21. After returning from the army, he quickly acquired a cannabis card.

Weed dispensaries, both storefront and delivery, have established a strong presence since California voters passed Senate Bill 420, which went into effect Jan. 1, 2004.

The bill established the amount of medicinal marijuana patients or their caregivers may grow and possess without being subject to arrest.

Having a cannabis card gives House the ability to legally carry marijuana, feel secure as a customer in a professional atmosphere, and have an alternative to other pharmaceuticals for the PTSD and seizures he acquired from his time in the military.

Black market marijuana dealers faced a challenge in keeping customers after the clinics began opening their doors, according to Jose Carbajal, an American River College student who sells marijuana.

“(Some dealers) got their card and started selling to clubs, but most of ‘em didn’t,” Carbajal said.

“Without a card, you’re asking a friend to commit a crime when you call them to hook up some pot,” House said.

House said that by far the best part about having a card is that he no longer has to feel like a criminal for smoking weed.

“You get to go to a professional business establishment, they’re going to cater to your needs by concerning themselves with my safety, privacy and the quality of product I’m buying,” House said. “I pay more, but it’s worth it.”

American River College student Pat Stark, 30, has been smoking marijuana since he was 16. He does not have a cannabis card and does not plan on getting one anytime soon.

“I never dealt with like, such large quantities that I was that worried about (getting arrested),” Stark said. “I don’t know, I guess I’ve just never really felt like jumping through all the hoops of it.”

Stark said that it is difficult to find marijuana on the black market that rivals the product at clinics.

“Oh, high grade indoor is rough to find nowadays,” said Stark, “But it was always kinda hard to find, you had to know the right people to find indoor because outdoor is easier to grow.”

The Adult Use of Marijuana Act, supported by former Facebook president and billionaire Sean Parker, is an initiative ending marijuana prohibition in California and is likely to be on the 2016 ballot.

Under the proposed initiative, marijuana would be regulated, taxed and treated similarly to alcohol. Adults would no longer be punished simply for possessing it, and law enforcement officials would be able to spend more time addressing other crimes.

It would take marijuana sales out of the underground market, and marijuana cultivation out of California neighborhoods and national forests.

California black market cannabis farmers have been able to survive since medical marijuana was legalized, but if the Adult Use of Marijuana Act passes, the threat from big business will be inevitable.

“After witnessing the massive amount of corporate money and power at the Las Vegas cannabis convention, it was overwhelming,” said Dillion, on a Facebook post. “They cared about our communities and livelihoods not one bit.”

Dillion said that small famers like himself can’t compete with the size of corporations.

“What the north coast has built with love, blood, sweat, tears for forty plus years is in danger. As a small farmer, we stand little chance,” Dillion said. “Yet, as an organized group, like an ag co-op, we are as big as any of these companies.

“We have the land, love and experience they lack,” Dillion said. “Like the days when road associations and volunteer fire departments and community centers were built, we need to come together for the benefit of us all. We hope to talk with you soon, until then, Happy Harvest.”

Stark and House both think that black market marijuana is so large that even if recreational marijuana was legal in California, there would still be a marijuana black market.

“You’re always going to have people wanting to grow it themselves,” Stark said.