Mustafa Shaheen looked like a million bucks as he walked hurriedly around Witt Gallery, making final preparations for the opening of his first solo art show, “Friends and Sometimes Friends.” On a small table by the entrance was a pencil-drawn image of celebrity chef Guy Fieri, screaming. The picture was titled “Welcome To Flavortown.” Like Fieri, Shaheen attended American River College. Unlike Fieri, everything else.

Born in 1985 in Egypt, Shaheen remembers his early life being centered around the concept of family. In fact, the majority of his family lived in the same building owned by his grandfather, who gave each of his children a section of the building to begin their families.

“I had a ton of cousins. English was my first language, but I picked up Arabic just playing with kids,” said Shaheen.

Shaheen and his parents, along with his younger brother, moved to Qatar, where both of his parents worked.

But they wouldn’t be there long, before having to move to America in 1996 as political refugees after his father, a firefighter for Qatar’s Royal Navy, unsuccessfully tried to blow the whistle on a string of corruption that he had seen.

According to Shaheen, co-workers of his father were stealing military equipment and selling it elsewhere. His father was jailed by Qatar’s military until he was released on the condition that he and his family leave the country.

“When you’re 11, you don’t really think about how deep that s— is in any way. You’re just like, ‘Oh, my dad’s in this weird solitary jail facility and I have to visit him once a month,” said Shaheen.

None of this was hidden from Shaheen as a child, which he sees as a good example of the differences between Middle Eastern culture and America.

“There is no coddling with children (in the Middle East). You grow up fast and mature quickly there,” said Shaheen. 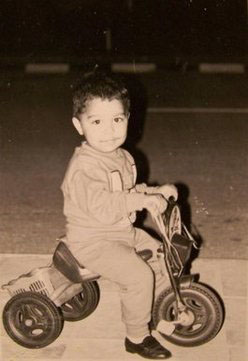 A photo on Shaheen’s website shows him as a child in Qatar. Shaheen’s family was exiled when he was a child — the result of political corruption within the Royal Navy, where his father was a firefighter. (Photo courtesy of Mustafa Shaheen)

When the Shaheen family first came to America, they settled in Visalia, California, which was approximately one-fifth the size of Qatar in 1996. Mustafa remembers two things becoming very apparent upon arrival: the Power Rangers were two generations ahead of where they were in the Middle East, and at 11 years old, he had a lot of navigating in front of him to fit in.

“Assimilating was pretty difficult. You already feel different in those pre-teen years, and then that added a lot of weight,” Shaheen said. “I faked my accent until it went away … Looking back at it now, I realize it was a lot for a little kid.”

Added to that stress was the fact that his parents didn’t qualify for the same jobs they had at home. His father became a motel manager, and his mother had to re-train for two years to become a nurse.

They separated when Shaheen reached sophomore year of high school, the same year that two planes flew into the World Trade Center, and America was plunged into a period of Islamophobia that it still has not recovered from.

“I remember walking to campus (on Sept. 11). The second plane hadn’t even hit yet. This random kid from my grade said, ‘Why are your people doing this?’ … How am I supposed to respond to that?

“I had to start thinking, ‘What would my friends think of me if they didn’t know me? Would they say the same things?’ I remember somebody saying, ‘Oh, well you’re not like the others.’ And that’s pretty racist too.”

While America was changing after that day, Shaheen’s new home was changing the course of his life too, as a person and as an artist.

Shaheen and his mother, Nadia Yousufzai, both say he picked up drawing when he was 3. They also agree that if he had never come to America, he wouldn’t be an artist today.

“(Egypt) is a third world country. It’s super super poor. People in general are practical. Art is an incredible luxury. Every Middle Eastern country weighs being some sort of doctor or engineer at the top of the list for their kids.” 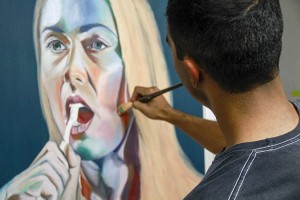 While Shaheen may have never been an artist in the Middle East, his origins do hold a place in his craft.

After initially struggling with using more creativity and expression, Shaheen, a portrait artist, has found a medium between what he calls a “Middle-Eastern practicality” and inventiveness.

Shaheen’s portraits are hyper-realistic, but painted with vibrant colors. According to the artist himself, the reality is here to stay.

“Depicting things in a realistic manner is always going to be a part of me. I can’t get away from that, as much as I try. I’ve grown to accept it and love it.” 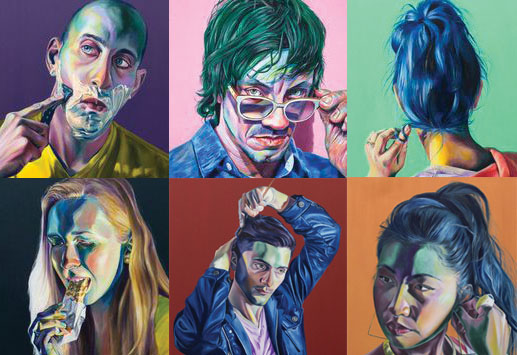 All of the visitors to Shaheen’s gallery reception had something to say about him — many called Shaheen their best friend.

Over and over again, any of Shaheen’s friends will tell you about his work ethic. It’s legendary, and the one reason for his success, according to Ian Harvey, a professor and mentor of Shaheen’s at Sacramento State.

“Of course he has talent, of course has vision, but a lot of people have that. He just works his butt off,” said Harvey. “I wish it could be sexier than that, but it’s just his hard work.”

To Shaheen, his work ethic is just a result him being grateful for his opportunity.

“I’m very aware of the luxury I have living here and being able to make art as a career. So I know I have to work hard, because of that luxury. I’m always appreciative of the fact that I’m so fortunate.”

That hard work extended to his opening night at the gallery. More than 30 people came through the small gallery throughout the night, a number Shaheen was ecstatic about. 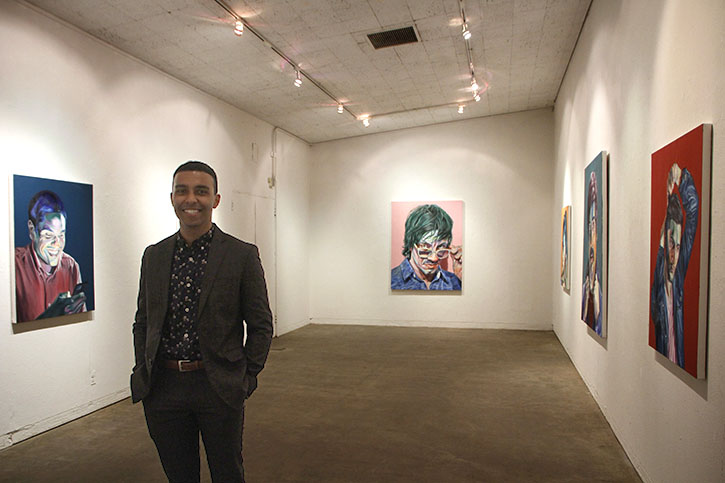 Shaheen proudly stands before his work shortly before the reception for his show, “Friends and Sometimes Friends.” Throughout the night, the gallery was packed with visitors, many of whom had fond words for both the art and the artist. (Photo by Barbara Harvey)

His mother saw past the smile just a bit, though.

“I think he’s very happy, but nervous at the same time,” she said.

“Sometimes, he can get very nervous about what he’s doing, because he wants to be the best.”

The last time Shaheen and his mother went back to Egypt was after graduating high school. When he got there, he felt off.

“It almost felt like that wasn’t home. It felt like I had spent my whole life in the U.S. That wasn’t my home anymore,” he said. “Family embraces you like you never left, but when I opened my eyes to everything that was going on, I really just saw how poor everyone was, and how much people were struggling.”

But now, in the land of success and excess, Shaheen is working harder than anyone, just so he can better than everyone.

In the end, Shaheen drew that Guy Fieri picture on a whim. He didn’t even know they both went to ARC.