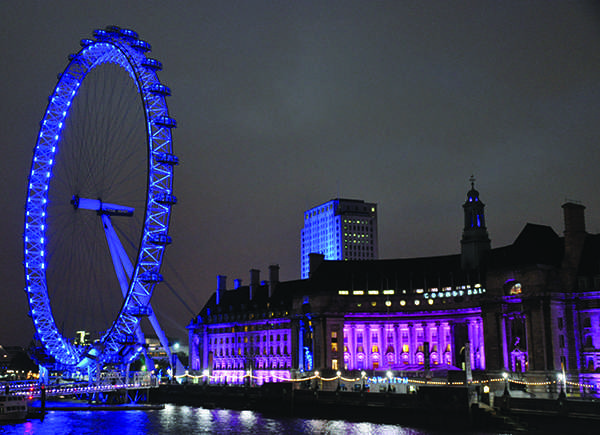 The London Eye, where Barnes and Ice shared their first kiss, is lit up at night.

It’s probably the sweetest and most cliched romance that a couple could have experienced.

Studying abroad is, “an opportunity to take classes that you would take here,” said Mark Stewart, the professor that is in charge of the psychology class that goes on the summer London trip. “Typically they fulfill general education requirements.”

“There are no curfews,” said Stewart. “There’s no requirement that you have to stick around London.”

“Classes are front loaded at the beginning of the program because students need more structure being 6,000 miles away from home in a foreign country,” said Bill Wrightson, the professor that created the summer program in Florence, Italy. “So there’s a lot more classes early on when students need, kind of structure and kind of contact and guidance.”

“We got there right when the Diamond Jubilee started,” said English major Ice. “So getting off the plane we were greeted immediately by red, white and blue stuff celebrating the queen’s 60th anniversary.”

“It’s like coming to America on the Fourth of July,” said psychology major Barnes. “It’s just, all of a sudden everybody’s so much (more) interested than they usually are (in their country).”

Oblivious to the fact that they both liked each other, their travel mates spent part of their time getting the couple together.

“There were just these weird coincidences where, I wanted to go off and do some exploring in one area and she didn’t really want to go with her roommate home, so she came with me,” said Ice.

The beginnings of their relationship started with a Harry Potter tour trip that Barnes had been planning since before the group left for the trip.

“I knew I wanted to go (to the Harry Potter tour), but I was too lazy to really do anything about it,” said Ice. “There were a bunch of emails going back and forth that I had access to, but I didn’t take advantage of that.”

Ice didn’t get into contact with Barnes about the Harry Potter tour until a few days, or the night before. They both disagree on the day it happened.

Ice called Barnes to ask if he could still go. Since the group ticket didn’t work, he was able to add to the group.

Once at the gift shop at the end of the Harry Potter tour, Ice ended up buying Barnes a Marauder’s Map, an item she had wanted to get herself, but had decided was too expensive.

“She asked what I got because all I had was a chocolate frog and this giant bag,” said Ice. “I told her I got the chocolate frog ‘and I also got this for you, because I know you wanted it.’”

“After that it was obvious,” said Barnes.

Barnes ended up sitting closer to Ice and hugging him more often on the trip back to their homestays.

“So of course, me being the oblivious guy, we get off the bus and I say ‘see you,’ and I go home,” said Ice.

Three days later, the couple got together.

On the London trip, the students go on various trips with Stewart to museums.

“We had a museum day. That was one of my favorite days,” said Barnes.

The class went to three different museums. The natural history museum, the science museum and the Victorian Albert museum.

“We went to the British museum twice,” said Barnes. “Once with the tour and once outside of it.”

When the two went on trips with a group, they would be put together for a lot of photos.

“We would take, four or five pictures of (the other two girls together) in a scene,” said Ice. “Then they would want to get four or five or six of us.”

After that point, Ice began to figure out that he was developing feelings for Barnes.

“I didn’t say anything because I have a habit of coming on too strong with people and I didn’t want to do that with this,” Ice said. “Especially considering a week before I left for the trip I decided, ‘you know what, I’m done worrying about having a girlfriend.’ I hadn’t had one yet.”

Ice was walking Barnes to her homestay and Barnes mentioned that her friend had asked her to bring home a red-head. Ice, being ginger-haired, began to connect the dots.

He mentioned that he thought Barnes might have a thing for him, to which she replied, “maybe I do.”

“For, like five minutes,” said Ice. “It was hilarious.”

One week later, the couple shared their first kiss at the very top of the London Eye.

The Joy of X fails to inspire joy