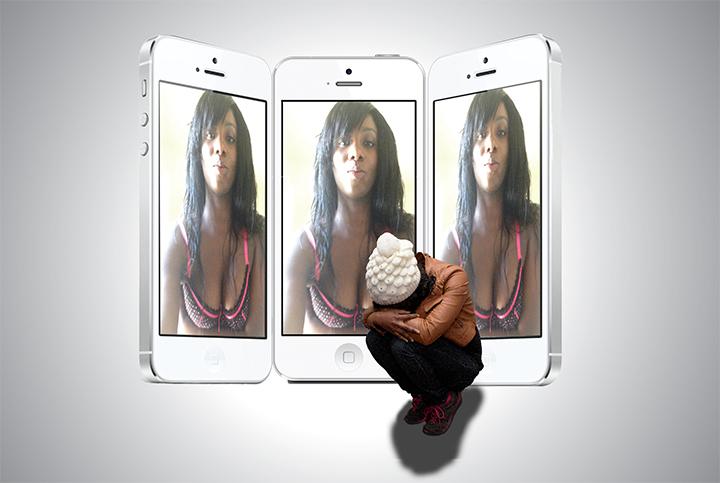 One leaked photo can destroy a person's life forever.

In the privacy of her bedroom, a girl takes picture after picture of herself. It wouldn’t be a big deal, except for the photos are all risque, and months later, they surface on the internet.

This is what happened to 24-year-old Kayla Laws. In October 2011, a picture of her left breast was spread across the internet after being posted on isanyoneup.com after her email was hacked.

Except Kayla didn’t send revealing pictures to a boyfriend, she sent them to her own email.

Three months after the photos had been taken, Kayla’s email was hacked, and just nine days after that, the pictures that were for her eyes only ended up on a website Hunter Moore created called isanyoneup.com.

On Moore’s site, anyone can post an explicit photo of another person, as well as link the pictured person’s social media accounts and personal information.

Kayla made a phone call to her mother, Charlotte Laws, saying “mom something terrible has happened,” and Charlotte jumped into action.

Kayla wasn’t the only victim getting hacked. After doing research, she found out that her friend Susan was also on this site.

According to Kayla, Susan only sent those pictures to her husband and that made it apparent that Susan was hacked as well.

Charlotte started what she called “Operation No Moore.” She wanted to destroy the man who was responsible for destroying so many other lives.

“I didn’t mean to set up the site. It was kind of just born,” said Moore in an interview with Drew Pinsky on Headline News in April 2012. “I was hurt and my friends were hurt so we thought to start this between us and other people got a hold of it and it took off.”

Charlotte sent a letter to Moore asking him to take down the explicit photos of her daughter, but Moore refused.

“My husband is a lawyer,” said Charlotte in a phone interview. “In the beginning he thought it would go away in a few days, but once he realized how serious it was he put pressure on Moore’s lawyers.”

Charlotte and her family worked diligently to get the pictures down.

“I received a phone call one day,” said Charlotte, “and the voice said, ‘We know where you live and we will get you.’”

That was one of three threats Charlotte received.

Moore and Evans were arrested on Jan. 23 on charges of conspiracy and aggravated identity theft. The indictment has 15 federal counts, and if convicted, they
can receive up to five years each for conspiracy and hacking, according to cbsnews.com.

Moore, who declined an interview via intermediary, Brodie Hayer, attempted to justify his website by saying, “It’s the victims fault. They took these pictures,” in a 2011 interview on the Anderson Cooper Show, even though he allegedly hired Evans to hack the emails of several people.

As stated on her website, allysonpereira.com, she sent her boyfriend naked pictures of herself and soon after they spread to elementary, middle and high schools.

“I was asked onto the Dr. Drew show by Dr. Drew. I had been on a multitude of times discussing sexting and bullying,” said Pereira. “I was nervous to talk to (Moore) because I knew he could be nasty.”

Pereira was given a chance to talk to Moore, and she started of by telling Moore that when she tweeted him, he retweeted her so his followers could cyberbully her.

Moore replied, “I don’t know how you could point your finger at me, you took the picture … it’s 2012. What do you expect to happen?”

A new law was signed Oct. 1, 2013 by Governor Jerry Brown imposing a penalty of six months in jail and a fine of $1,000 on people convicted of distributing sexual images of exes.

What happens if the pictures aren’t distributed by an ex-lover, but an ex-friend?

He had a woman named Angel on his show, and she explained why she spread inappropriate pictures of her friends.

“The whole school knows … my life is ruined now,” posted Audrie Pott, 15, on Facebook before committing suicide. She committed suicide after photos of her being sexually assaulted circulated around her high school.

According to nbclosangeles.com, Pott was at an unsupervised party where she was inebriated. A group of boys did “unimaginable things,” to her said the family attorney, Robert Allard, in an interview with Bay Area News Group.

A hammer, a hatchet and a lifeless body