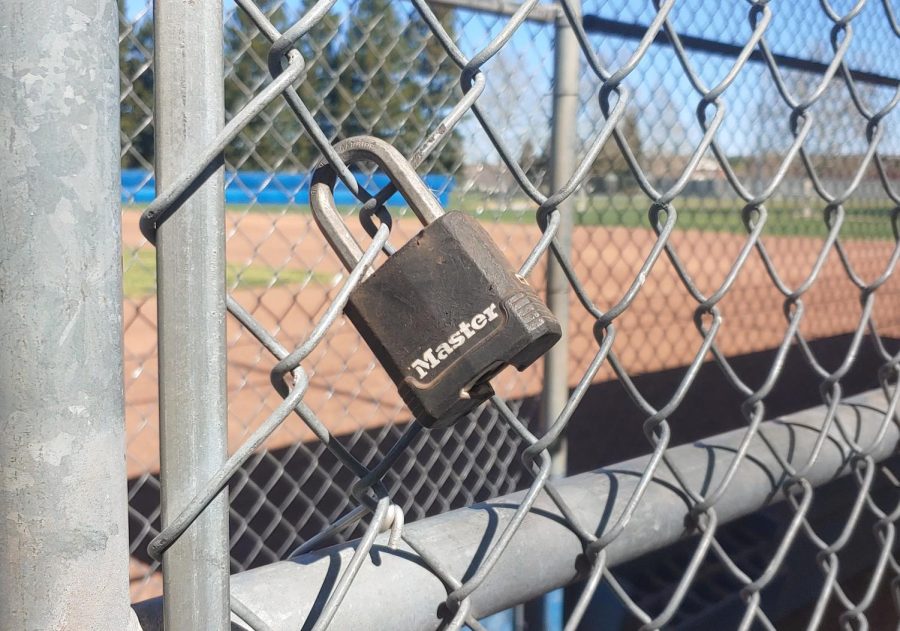 Major League Baseball imposed a lockout to get a new Collective Bargaining Agreement made. But the lockout ended up delaying the regular season, angering players, and turning fans away from the game in favor of other sports. (Photo Illustration by Sam Berg)

After the Atlanta Braves won the World Series, the Major League Baseball offseason began. Free agents signed new contracts with new teams and baseball fans across the country were excited for the new season, but that came to a sudden halt.

The Collective Bargaining Agreement between the MLB owners and the MLB Players Association was expiring; a new deal had to be agreed upon before the start of the new season. A deadline was set for early December.

On Dec. 2, the MLB imposed a lockout as a means of getting a new CBA worked out. The lockout would prevent all 30 teams from making any transactions. A new deal was agreed upon on March 10, but that still had many repercussions during the 99-day work stoppage.

Although baseball is back now, the lockout was not only an ineffective way in getting a new CBA done, it has turned fans away from baseball in favor of other sports and it will permanently scar baseball for years to come.

For starters, the lockout was not necessary for discussing a new CBA. Teams could still make transactions and changes to their team as a new deal was being negotiated. But the MLB imposed the lockout as a tactic to speed up the negotiations.

But the idea of preventing movement proved to be ineffective. Both MLBPA and owners remained out of contact until Jan. 13 when they met for the first time since the lockout started. If the MLB put the lockout in place to get a new deal figured out, then why did it take 42 days for both sides to meet?

The lockout not only prevented teams from making any other moves, it prevented players from interacting with coaches and using the team’s facilities. All players had to find their own training sites to use during the lockout. This was especially harmful to players who were dealing with injuries and did not have the professional trainers to aid in their recovery.

These debates have now caused a delay to both spring training and the regular season. Neither side is budging on their demands. Both sides had rules and regulations, but neither the MLB nor MLBPA were willing to give anything, which has continued this lockout.

Instead of fans looking forward to seeing their favorite team suit up in February, they have been left waiting not knowing if a season was actually going to happen. So in the meantime, many turned to other major sports and those sports have thrived.

The National Football League’s Super Bowl saw a significant increase in ratings and streaming revenue in 2022 compared to 2021, according to Sports Media Watch in a recent article. The National Basketball Association has also seen an increase in viewership from the previous season. When fans are looking to be entertained and one sport is not happening at a given time, it makes sense why these two sports saw an increase in popularity.

Not only were the fans turning their backs on the game of baseball, but many MLB players also took to social media to show their disapproval of how the MLB was handling the lockout.

Chicago Cubs pitcher Marcus Stroman took to Twitter and called out MLB Commissioner Rob Manfred on several occasions for delaying the season and ruining the game for fans.

“[Manfred] doesn’t care about any of y’all. Don’t get it twisted. The players are ready to perform, compete, and interact with all of you,” Stroman said in a tweet. “However, Manfred has been ruining our game while playing puppet boy to the owners. That’s a fact. We remain ready and anxious to play!”

Although a deal is in place now, there is no denying the turmoil caused by the lockout will be remembered. From fans turning to other sports to players openly criticizing the commissioner of baseball, the game of baseball may not be seen as bright as it once was. Although it is now behind us, the 99 days of inactivity has likely caused negative long-term effects on the game that will remain for years to come.