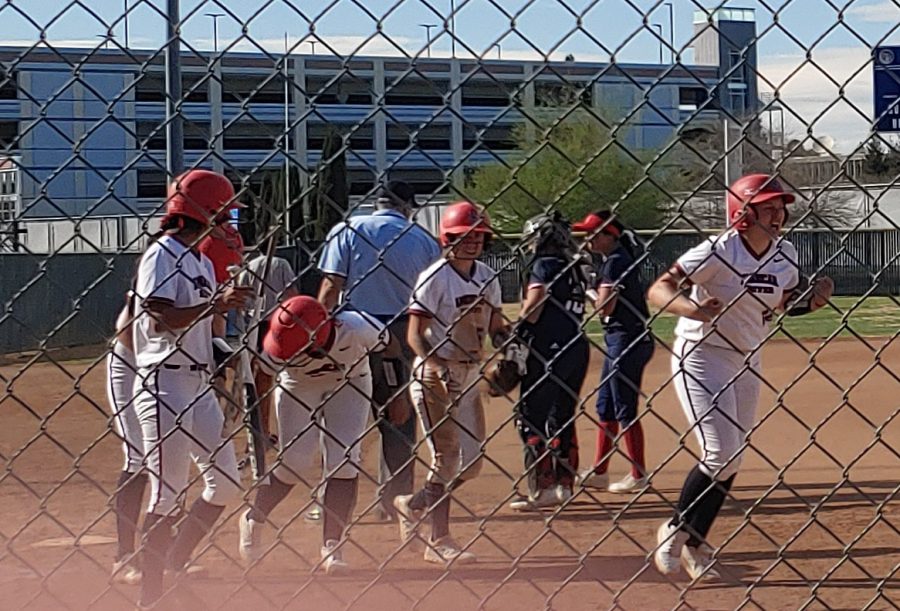 The American River College softball team played a doubleheader against Santa Rosa Junior College on March 12, 2022. ARC would lose both games but the scoring efforts were aided by Casey Bennett. (Photo by Sam Berg)

The first game was a big loss for ARC as the team held a 5-2 lead late in the game. Santa Rosa would go on to score four runs in the top of the sixth inning thanks to a two-run single by first baseman Emma Weiand. Santa Rosa won the game 6-5.

Game two would also not go in ARC’s favor. After ARC took an early lead with a first-inning three-run homer by third baseman Casey Bennett, Santa Rosa responded with 12 runs in the top of the second inning. Both teams would add two more runs later on for a final score of 14-5.

Bennett says this was a tough series for ARC, but the support of her teammates throughout kept a positive spirit in the dugout.

“I felt confident and strong and it’s really hard not to feel that way when I have such a strong team who I know will cheer me on and have my back no matter what happens,” Bennett said.

Bennett says that the challenge of tough competition motivates the whole team to get better and improve their skills. She says that everyone on the team has each other’s backs and gives each other support and encouragement for whatever challenges they come across.

“Each of us has our own areas of the game that we have to focus on and we all work hard to overcome those things and get better,” Bennett said. “We ask to be challenged. It’s that kind of attitude that pushes everyone else to want to work harder and be challenged.”

Center fielder Alexis Watson says that the long season has started to catch up to the team but everyone on the team is supporting each other and are looking to finish the season strong.

“We’re battling mid-season fatigue and injuries that definitely started showing this Saturday,” Watson said. “But we kept the energy high and stayed working for each other.”

Watson says that everyone on the team is looking to improve in the following weeks. She pointed out how there are still plenty of games left in the season to rebound and the team is ready to compete at a high level.

“I think the team will definitely head into next week ready to work hard and get better,” Watson said. ”We’ve still got a lot of games left and we’ll be ready for it.”

For more information on the softball team and its schedule for the remainder of the season, visit the Beaver Athletics website here.