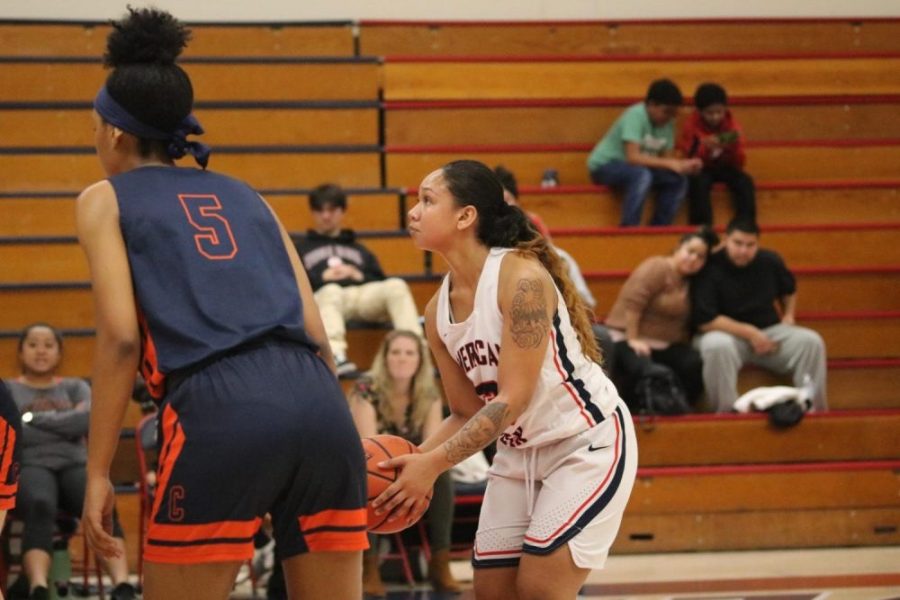 Guard Shantanice Mendoza shoots a free throw against Cosumnes River College on Jan. 31, 2020. On Aug. 20, the Los Rios Community College District announced that no fans would be allowed at indoor sporting events. Allowing a limited number of fans and social distancing would be ways to bring fans back. (File Photo)

On Aug. 20, The Los Rios Community College District announced that fans wouldn’t be allowed at any indoor events during the fall semester. The LRCCD should rethink this policy and allow fans at indoor sporting events moving forward.

Student-athletes have already had a difficult time during the COVID-19 pandemic, either having their seasons cut completely or having it reduced. Allowing fans, even if only a very small number, can give student-athletes a little more sense of normalcy after their athletic careers have already been altered due to the pandemic.

When the policy was first put into place, the LRCCD wasn’t going to allow anyone into the building for indoor events. Also, members of the media weren’t going to be allowed in to cover the games.

After some push-back from the Current, that policy has changed and members of the media who are fully vaccinated and wear masks can now attend to cover games.

For fans though, the policy hasn’t changed and they still aren’t allowed inside indoor spaces.

This isn’t fair to the average fan or family member, as they can’t see their favorite athletes do what they do best. Some people haven’t seen their athletes perform in over two years thanks to COVID-19. And now, when sports are back, they still can’t physically see them play.

The policy regarding no live spectators is good for the health of everyone involved, but sporting events need a few spectators to feel like an actual sporting event. Without live fans and spectators, the games essentially seem like scrimmages rather than games with fan interaction and competitive environments that can have an effect on the outcome of the games.

To follow COVID-19 guidelines and safety protocols, the LRCCD can limit seating to at least three people per athlete, just so the feel of fan interaction can still be present in indoor sporting events.

The LRCCD should also implement social distancing, which would be a good way for people to still enjoy games while also feeling safe.

The LRCCD can still allow fans while also following social distancing guidelines. Allowing a limited number of fans, who can all sit 6 feet apart from each other, would be a good way to allow student-athletes to have some sort of normalcy and would allow fans to enjoy live sporting events as well.

This is the best way to keep everyone safe, while also allowing athletes to have fans in attendance at their games. It would also allow the fans to be able to enjoy the game live, rather than watching it online or not being able to see it at all.

By allowing a limited number of vaccinated fans and enforcing social distancing, the LRCCD can give student-athletes the experience they deserve.