The loss came against nearby divisional opponent Sierra College on Nov. 6. 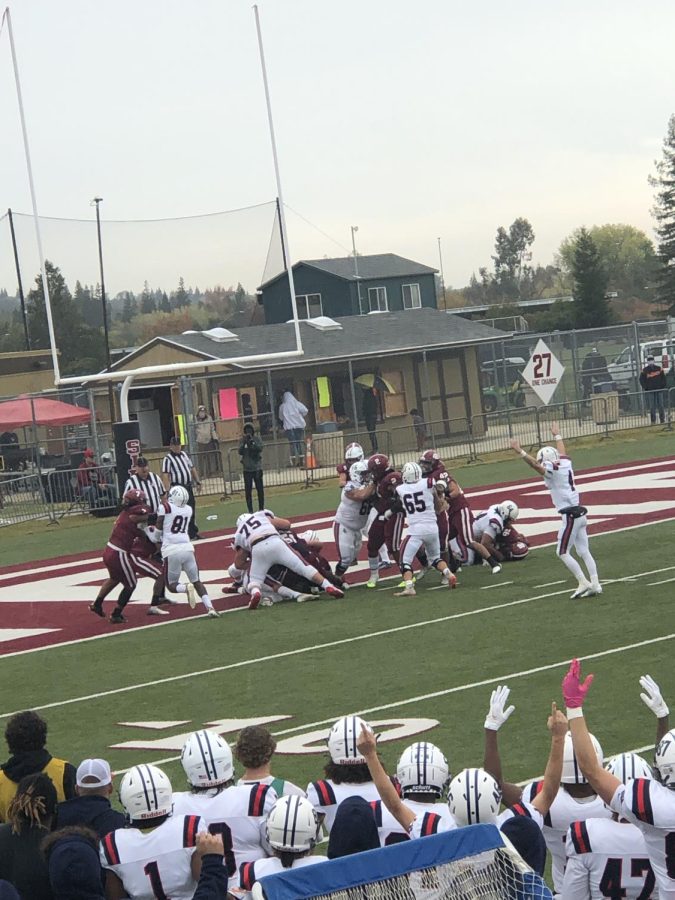 The American River College football team is 5-4 after its recent 42-34 overtime loss to Sierra College on Nov. 6, 2021. (Photo by Cynsere Kelly)

On Nov. 6, the American River College football team lost its game 34-42 against Sierra College out of nearby Rocklin.

Sierra College is a favorable opponent to ARC, as the two teams are in the same Northern California division, and are considered one of the top community college teams in the Sacramento region.

The game day’s weather was cloudy with slight rain throughout the first and second quarter, though the weather didn’t play much of a factor in the contest. The attendance of the contest was at around 2000 people according to ARC’s athletics page.

ARC quarterback Robert Jones had 288 yards passing and one touchdown, andARC running back Avant Jacobs had 14 rushes for 91 yards and a touchdown.

The team had a few key plays, like when Robert Jones threw a 49-yard passing touchdown to wide receiver Sawyer Merrill, who had seven catches for 155 yards receiving.

Jacobs also had a 44-yard rushing touchdown to lead the game into overtime with 1:47 left on the game clock.

Field goals also played a part in the game, as kicker Zach Schriener made two out of three field goals and was four out of four on points after touchdowns.

The game went back and forth as the second half started, scores changed, and ultimately the game was sent into overtime.

Both teams couldn’t score touchdowns in the first overtime, but in the second overtime, Sierra scored a touchdown and sealed the game.

Jon Osterhout, ARC’s head football coach, said the team gave themselves a chance to win the game but committed too many turnovers.

“It was a game of momentum swings for both programs, we didn’t take full advantage of putting the game out of reach in the second quarter,” Osterhout said “

Osterhout also said the third quarter was filled with a lack of execution and poor management of the game.

Osterhout added that the team struggled in a key area.

“Our inability to manage the football with four turnovers and big plays given up defensively was the game’s downfall,” he said. “Despite all of this, we gave ourselves a chance to win the game.”

After a wild overtime loss, Osterhout also shared what he told his team after the loss.

“We can’t afford to give up explosive plays and turn the ball over versus a quality opponent. I was proud of the fact we continued to believe, we just need to finish better,’’ Osterhout said.

The team is now 5-4 on the season and according to Osterhout, the team is looking towards winning its next game and awaiting its playoff destiny.

“We will finish the regular season off this Saturday, in some of our players’ last home game, and wait for selection Sunday for playoff and bowl game announcements,” Osterhout said.

The team in fact did win their next game 70-13 vs the College of Siskiyous. The team has made the playoffs and are scheduled to face a familiar opponent San Francisco City College who the team faced previously on Sep. 25.