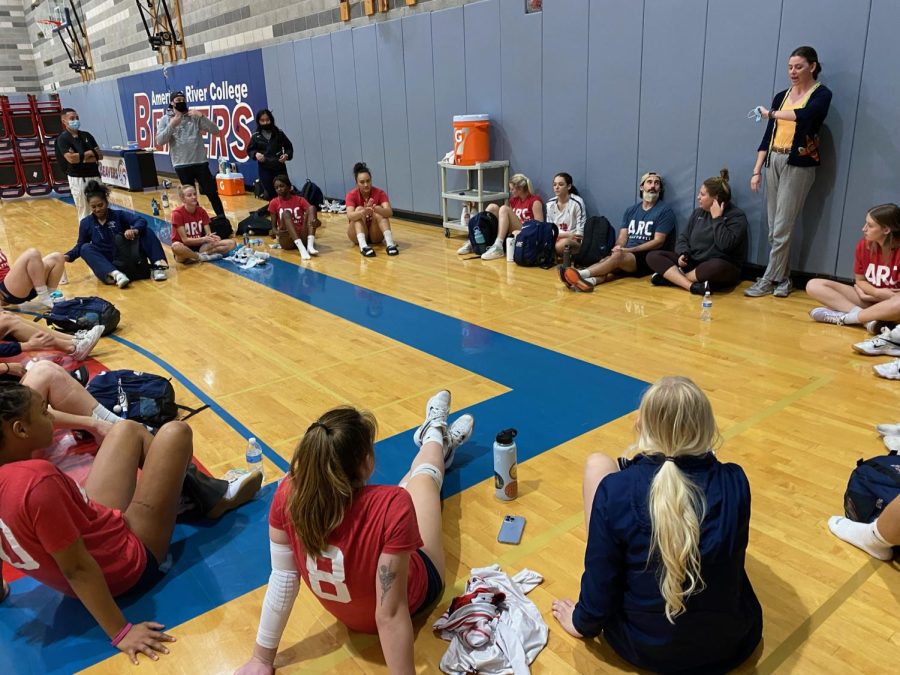 The American River College women’s volleyball team and Head Coach Carson Lowden discuss the game after its match with Sacramento City College on the ARC court, on Oct. 16, 2021. (Photo by Usamah Hammour)

It was an exciting match, during which the ARS team excelled at a distinguished offensive level. But in the first half of the set, the team seemed not playing as normal, maybe because of some nervousness.

Kat Sullivan-Toniez, interim dean athletic director, explained how permitted visitors could move in the match. She asked them not to cross the blue line which surrounds the court due to the COVID 19 pandemic.

This match was the last match of the first round of conferences, where the first match was against Sac City.

Before the match, head coach Carson Lowden explained to the journalists their limited movement on the court due to the COVID 19.

The first set started with some difficulties for ARC. In the beginning, there was a little instability at the team level, so they made some small mistakes, such as when they made blocking, touched the net, or did not cover the areas in their court properly and in time. The team displayed an average performance in its defensive and offensive during the first half of the set. In the second half, the ARC team controlled the set and won 25-15.

During the second set, the team still had the same situation, his performance wasn’t stabilized. The team still had difficulty on the court,  which caused the same type of small mistakes, such as when they made blocking errors, touched the net, or did not cover the areas in their court properly and in time. But in the second half of the set, they repeated the same faults as in the first set, and they controlled the set..

However, in the third set,  the team showed a better level in its defensive and offensive, where they completely dominated the set by performing a strong offense, and won by a margin of 25-7—winning the match 3-0.

Among the team’s key players were Awelina Fakalata who made 17 kills and Shanaley Lakop who made five kills, and Sabrina Bigley who had 28 assists.

Lowden says in the coming matches, the team needs to continue to improve on both the offensive and defensive sides of the ball, which will increase the team’s chance at a championship.

“I think this team is talented and has a lot of heart,” Lowden said. “A lot of things have to go right to win a championship, and this team has the stuff to be in the conversation.”