The American River Current • May 10, 2021 • https://www.arcurrent.com/sports/2021/05/10/arc-mens-tennis-is-looking-to-serve-its-competition-as-seasonal-matches-start/ 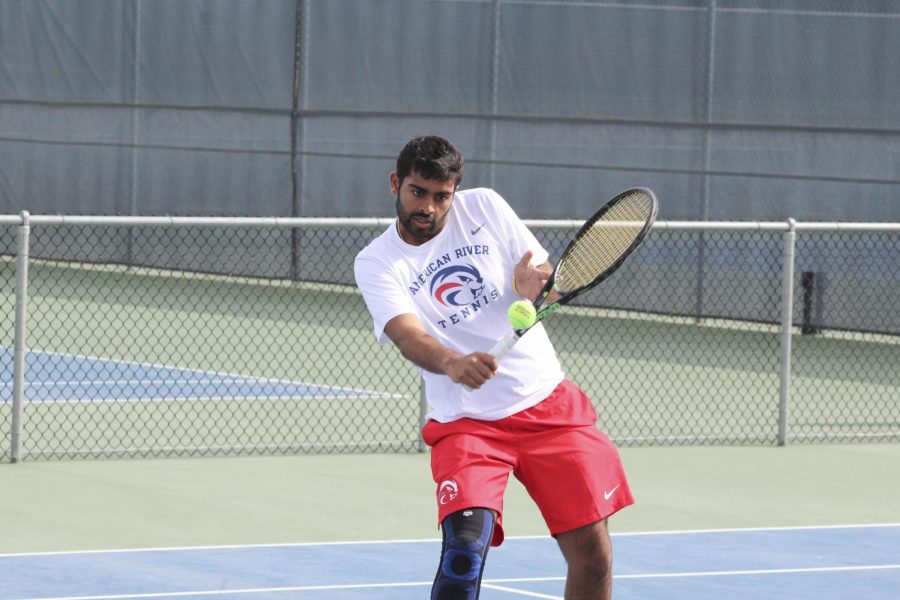 American River College's Paul Bhatia returns a ball during a non-conference game against De Anza College on Feb. 24, 2018 at ARC. ARC is looking forward to a full season after going 10-0 in a shortened district only 2021 season . (File Photo)

According to Bo Jabery-Madison, ARC men’s tennis coach, the 2020 campaign promised to be one of the best years in program history before the season was shut down midway due to the COVID-19 pandemic.

“The 2021 squad was even potentially stronger than the 2020 team, but again, the season ended, this time before it began, because of the lingering concerns over COVID-19,” Jabery-Madison said.

Instead, the team was only able to play within the district, meaning they were only able to compete against Folsom Lake College and Cosumnes River College.

The team has started playing its district matches and has had some success.

They scored 9-0 wins against FLC and CRC, using only players that would not be negatively affected in terms of eligibility.

Jabery-Madison says that the team is being tested for COVID-19 regularly.

“It has been a challenging year for the team members. Half of the players and coaches are tested for COVID-19 every other week,” Jabery-Madison said.

Jabery-Madison says the team’s biggest challenge has been not getting the chance to play.

“Every day coaches and players are required to fill out a questionnaire in regard to whether they have felt any symptoms or been exposed to anyone that has COVID-19,” Jabery-Madison said. The most challenging aspect of the situation is the lack of opportunity to compete.”

Jabery-Madison says the pandemic has affected student-athletes looking to play and move on from ARC.

“Most of our players are only here for two seasons,” Jabery-Madison said. This means that many of them that had hoped to earn scholarships or roster spots at four-year institutions, will not have the opportunity to do that because of the COVID-19 shutdowns over the past two seasons,”.

Jabery-Madison says he is looking forward to next year.

“It is heartbreaking and frustrating, but we don’t control it and we look forward to next year when we can get back out on the courts and give these hard-working student-athletes the experience that they deserve and have earned,” Jabery-Madison said.