Despite COVID-19 and campus lockdowns, the team is ready to hit the court 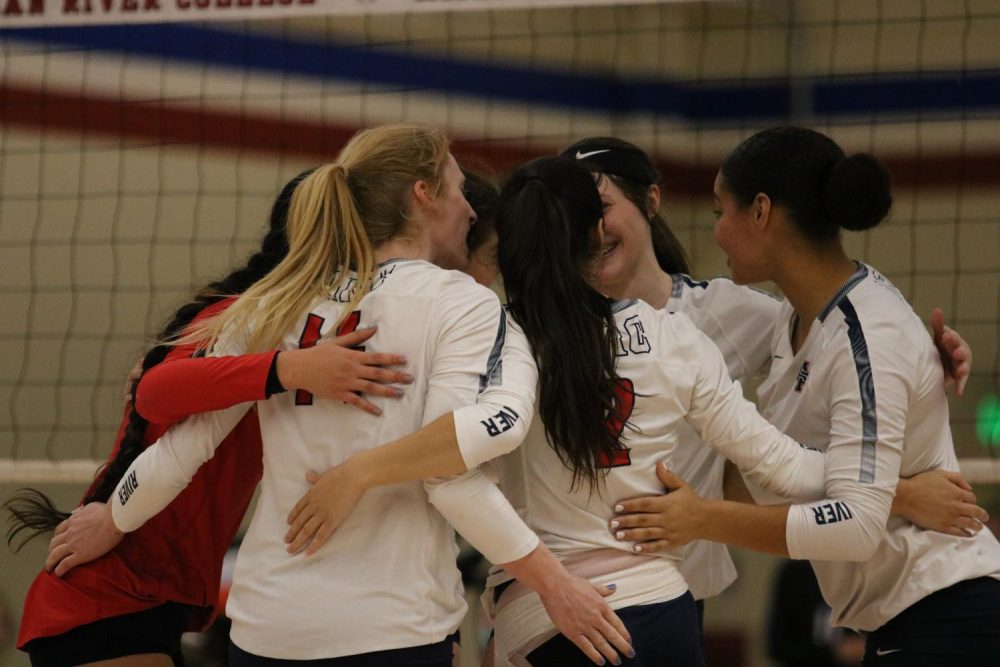 The American River College women’s volleyball team, which won the state championship in 2018, fought hard to try and retain its position through 2019. Players and their supporting faculty are hoping to hit the ground running next year. (Photo by Emily Mello)

The American River College women’s volleyball team entered the 2019 season as defending state champions. Though there were some stumbles during the early weeks of the season, with the team losing four of their first six games, they decisively found their footing for the rest of the season. The ARC Beavers went through all of October without losing a single game, and only conceding a single game in November to Sierra College’s women’s volleyball team.

Their season came to an end during the state quarterfinals against the No. 1 ranked Irvine Valley Lasers, a long-awaited rematch where the Beavers came up short. Coach Carson Lowden saw the loss as an opportunity for the team as a whole.

“The team felt like they left San Diego with unfinished business and were hungry to grow and come together even more in the off-season,” Lowden wrote in an email to the Current. “The first few weeks of the spring semester saw a team that had a slightly different look. It wasn’t long before the volleyball we were playing in the gym was rising to a level that can be hard to achieve when you are scrimmaging against your teammates day after day.”

But like all sports programs at ARC this year, COVID-19 put everything on hold once the campus was shut down.

“The shutdown happened so fast that it was hard to process,” Lowden said. “I genuinely thought we would be back in a few weeks, a month, something.“

The campus has remained closed, however, and it’s been confirmed that the spring 2021 semester will be remote learning only. This had immediate effects for all athletes on the campus, forcing the various teams to find alternatives to ARC’s training fields and equipment.

Lowden attributes the women’s volleyball team’s success on the court to a training regimen designed by former ARC head football coach, Jerry Haflich, but the lockdown has denied the volleyball team access to facilities that played a crucial role in his players’ conditioning.

“From a training standpoint, the first thing that we started losing ground on was strength and conditioning,” Lowden said. “Once we no longer had access to any of our facilities, the gals weren’t able to move weight and the work they had put in the first half of the spring quickly faded.”

Like many other departments at ARC, athletics faculty staff needed to transition to online learning.

“Zoom has been a really great tool for us when we are forced to be apart,” Lowden said. “We also use our Canvas course page to do discussions and assignments related to volleyball.“

Sabrina Bigley, a returning starting setter for the team, said that the switch to online learning was a struggle both as a volleyball player and a student.

“As an athlete we are used to constantly having access to a weight room, a gym, and a training room with athletic trainers,” Bigley said in an email to the Current. “With the pandemic forcing all classes to revert to online, it has been more difficult for me to keep up with homework and studying at home.”

Though the current season was canceled, Lowden is positive that the women’s volleyball team could return to playing as early as spring 2021.

“We already have a schedule mapped out in which our first competition would be February 5th against Fresno,” Lowden said. “Many people have worked to put forth the plan for the California Community College Athletic Association and the plan for American River College. On an association level, the season for spring has been shortened to 70% of the competitions.”

According to Lowden, state tournaments remain canceled over safety concerns, as they would involve bringing together teams from greater distances away. Additionally, ARC’s athletics faculty have been working with trainers from colleges around the state to develop pre-practice protocols focused on player and staff safety.

“The gals continue to be motivated, but I think it gets a little more frustrating with each setback we face,” Lowden said. “The last time our face-to-face date got pushed back my athletes were frustrated, and while it is hard, that shows me they still care. I’m thankful each day for the commitment they have, and continue to maintain, to this program.”

While there is no guarantee that sports teams will return to full schedules by the end of 2021, the women’s volleyball team is going to prepare for the coming year with the intent to play.

“I try to focus on the fact that I will play again and I want to be ready when that time comes,” Bigley said. “I would also say [to other athletes] don’t lose sight of the reason why you are still playing the sport, even if the motivation is low.”