“I run around my neighborhood and workout in my backyard” 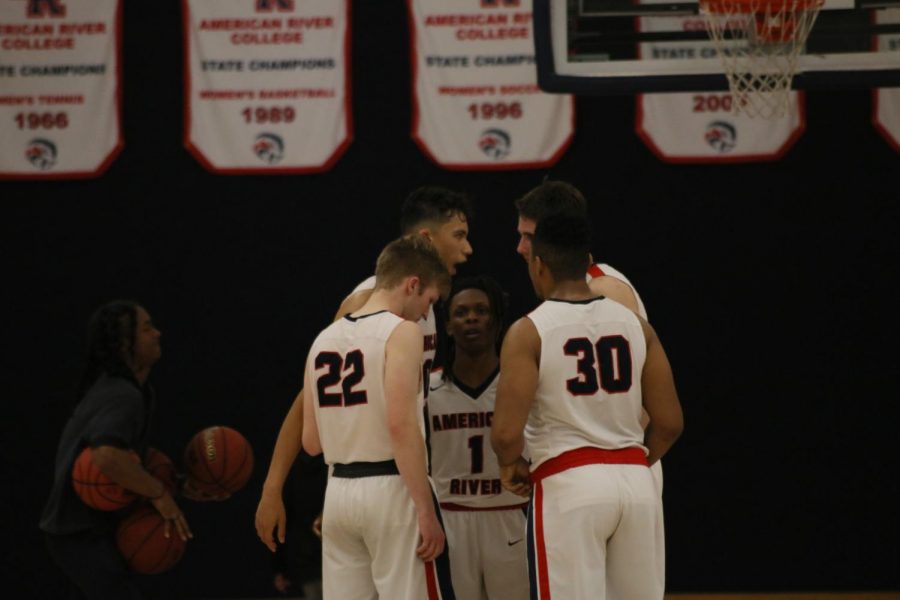 Members of the American River College men’s basketball team huddle up during the game against San Joaquin Delta College on February 11, 2020. The team is now working out on their own, after practices and games have been canceled due to the coronavirus pandemic. (Photo by Heather Amberson)

With the coronavirus pandemic continuing to force the closure of most college campuses, some athletes have had their seasons canceled, while others are still to be decided on, like the upcoming season for American River College’s men’s basketball team.

“The last I heard, there was going to be a decision made on October 1, [with] possible face to face gatherings or an extension for re-evaluation,” Giorgi said.

While the team has been away from campus, they have continued to stay in touch virtually.

“We have established a TeamSnap app for mass communication, but it’s definitely been difficult in comparison [to being in person],” Giorgi said.

According to ARC forward David O’Looney, the team has also stayed in touch over Zoom.

“We are still communicating as a team over Zoom and text, as our coaches keep us updated on what to expect in the upcoming months and give us great tips on different ways we can prepare ourselves for the season ahead,” O’Looney said.

While the team isn’t together, the players have found other ways to get workouts done.

“I have been trying to stay in shape by running and lifting weights as much as I can. I have also been able to get on a court and play with a handful of other local college kids from many different schools,” O’Looney said. “Right now, everyone is just doing their own thing to get ready and prepare themselves for the upcoming season.”

Despite both campus and public gyms being closed, ARC guard Jair Lang has also found other ways to work out.

“I would run around my neighborhood and work out in my backyard,” Lang said. “[I did] sit-ups, bench, gymnastic rings, core, and jump rope,” Lang said. “I was able to get in contact with my trainer, who has a gym with weights and a court, allowing me to get full workouts.”

Lang says that he will continue to stay in shape, whether there is a season or not, because of the love he has for the game.

“Staying in shape has always been a priority, gym or not. I always work as if the season is coming up, and even if there wasn’t going to be, I’d still be working because I love the game of basketball,” Lang said.

Lang also says that quarantine hasn’t made him try anything new.

“Quarantine hasn’t affected me to where I try new workouts, but it was different than my school workouts for a minute,” Lang said.

According to O’Looney, there are also talks about athletes having another year of eligibility.

“The league is still discussing whether or not to let us play this year without using up our year of eligibility,” O’Looney said. “That’s what some of us are hoping for, but no word yet.”

According to O’Looney, the team may be able to practice together soon, and that there is a possible plan for the season to happen.

“As of right now, they say we will be back and able to practice as a team sometime in October, but everything is still to be determined,” O’Looney said. “So far, all that we have heard is that we are supposed to start the season in January, playing four preseason games instead of the normal 12, and still have a full season.”