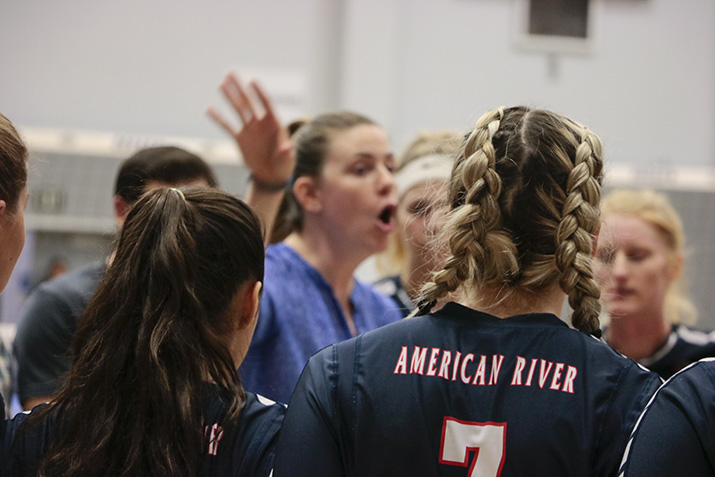 American River Volleyball -- pictured here at the quarterfinals of the CCCAA State Championship Tournament in November, 2018 -- closed out another successful season this year and will play their first post-season game on Nov. 26, 2019. (Photo by Jennah Booth)

The volleyball team at American River College has had yet another successful season, ranking fourth in California and third in Northern California. Their current overall record for the season is 21-7.

ARC closed out its season strong, embarking on an 18-game win streak towards the end of the season, before losing to Sierra College on Nov. 15. Before the loss to Sierra, their previous defeat came over two months ago against Folsom Lake College on Sept. 20. Despite the loss to Sierra at the end of the season, ARC is still scheduled to compete in the playoffs.

Head coach Carson Lowden said she believes the team has undergone plenty of growth throughout the course of the season, which may have been the key factor to its double-digit win streak.

“I think this team has done a ton of growing and coming together over the course of the season, and it has been a really rewarding journey,” Lowden said in early November. “The growth that this group has experienced together has been pretty special and I think that led to the win streak that we are on right now.”

Sophomore Allison Linder, who has 222 kills on the season, said she has also noticed the bond the team has formed over the past few months. She acknowledges that getting comfortable with new teammates can be tricky at first.

“Since community college is only two years, there is not very much chemistry in the beginning,” Linder said. “But I think from the beginning [of the season] to now, we’ve grown so much together.”

According to Linder, the team’s roster initially extended to nearly 30 players. With that many players, it may be difficult for each athlete to get comfortable with one another in such a short period of time. But Linder and Lowden said they believe that the team has already overcome that hurdle.

“We started with 26 girls,” Linder said. “It’s hard to get that comfortable playing with each other at first, but we’ve been together for at least three months now and it’s nice to see that we’re a cohesive unit. We’re able to bond, we know each other and when to give and take.”

Improved defense may also be a factor in the team’s success this season, as 15 of ARC’s 23 wins of the season were shut-outs. Starting sophomore Andreia Keane, who’s playing her last season for ARC, said she primarily focused on improving her own defense at the start of the season.

“I wanted to work on my defense more,” Keane said. “I wanted to get in the mindset of just going because I kind of hesitated [last season] and hesitating in volleyball is not a good thing.”

As a result of its success on the season, the Beavers have clinched a playoff berth. While their seed and opponent for their first postseason game is currently undetermined, the team has a date scheduled for Nov. 26.