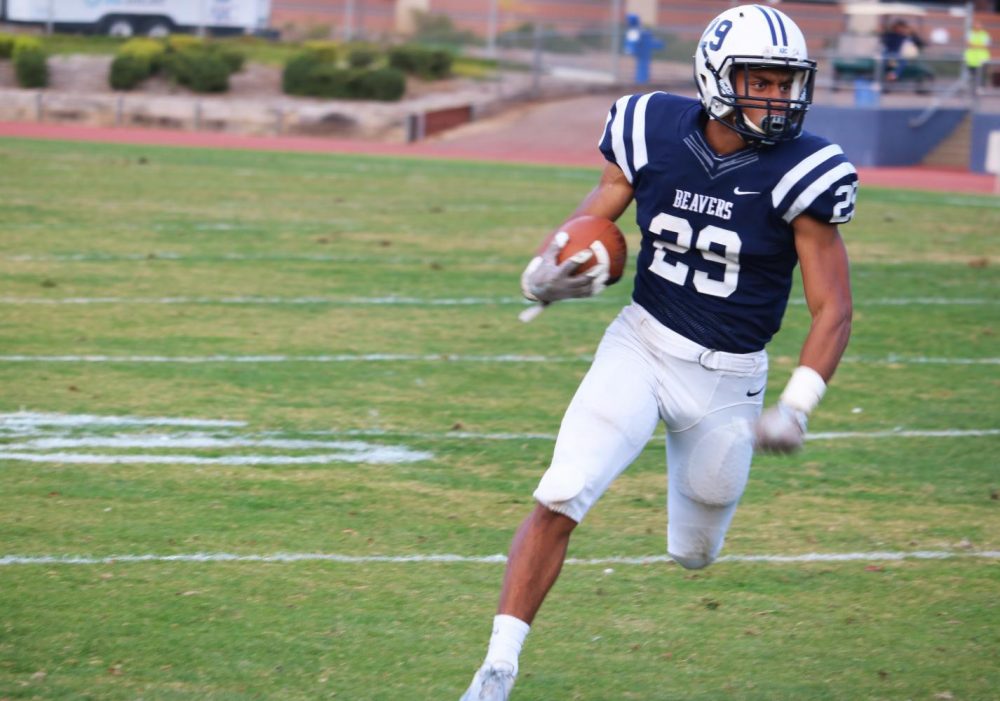 Running back Chris Osby works his way down the field to gain extra yards and help American River College in it's game against Feather River College at Beaver Stadium on Nov. 16, 2019. (Photo by Brandon Zamora)

The American River College football team defeated the Feather River College Golden Eagles 51-20 in dominant fashion at ARC’s Beaver Stadium on Nov. 16. With this win, ARC’s football finished the season with an 8-2 record and finished 5-0 against conference opponents.

Since the first drive of the game, ARC had full control when it was able to drive down the field in six plays that went for 58 yards and resulted in a touchdown. Quarterback Marco Baldacchino connected with wide reciever Markel Quinney on a 10-yard pass to give ARC an early 7-0 lead.

After Feather River’s first drive resulted in a three and out, ARC would get the ball back and quickly put up seven more points on the scoreboard. This time, Baldacchino would throw another 10-yard pass to wide receiver Naequan Parker, making the score 14-0 only five minutes into the first quarter.

If there was ever a “player of the game award” handed out in each game, it’s safe to say Baldacchino would get that award at the end of this one. In total, he threw four 226 passing yards and six passing touchdowns, with one interception. Yet, despite playing a game that makes his stat sheet look nice, Baldacchino thought he could’ve done better with his performance.

“I thought I did all right out there today,” Baldacchino said after the game. “I threw that pick that gave the other team a touchdown, but overall our offense played well and we came away with a big win.”

Watching this offense play the way they did was like traveling back in time to watch the 1999 St. Louis Rams play again; back then the team had the nickname “The Greatest Show on Turf” due to its high power scoring offense. Like the Rams did 20 years ago, ARC puts on a great show in the first half where six out of their seven drives on offense resulted in a touchdown.

ARC head coach Jon Osterhout said he was very satisfied with how his team performed in the first drive, pointing out that one of the keys to victory going into this game was to start off fast, which was exactly what they did.

“We had a really well executed game plan this game,” Osterhout said. “Accredit to our offense and coaching staff for putting us in a position to march down the field on that first drive to really set the tone and tempo to start the game.”

At the end of September, the ARC Beavers had a record of 2-2, ending the month with a two-game losing streak that looked like it was going to slow down their momentum. However, now with a six-game winning streak and a dominating win over a conference opponent, it looks like this team has nothing but confidence and momentum heading into the playoffs starting Nov. 25.

ARC’s players and coaches said they are feeling good, and they know now that in order to win it all this postseason, they need to keep their winning streak alive. Osterhout feels good about his team’s chances to do just that in the playoffs.

“We feel like we have a ton of momentum going at this point, and we’re certainly heading in the right direction,” Osterhout said. “We don’t care who we play, whether it’s at home or on the road, it’s going to take one practice at a time to position ourselves to win a game next Saturday.”

Their first playoff game will be on the road against the team that handed ARC their last loss of the regular season: Modesto Junior College Pirates. The game will start at 6 p.m. on Saturday, Nov. 23 at Modesto.