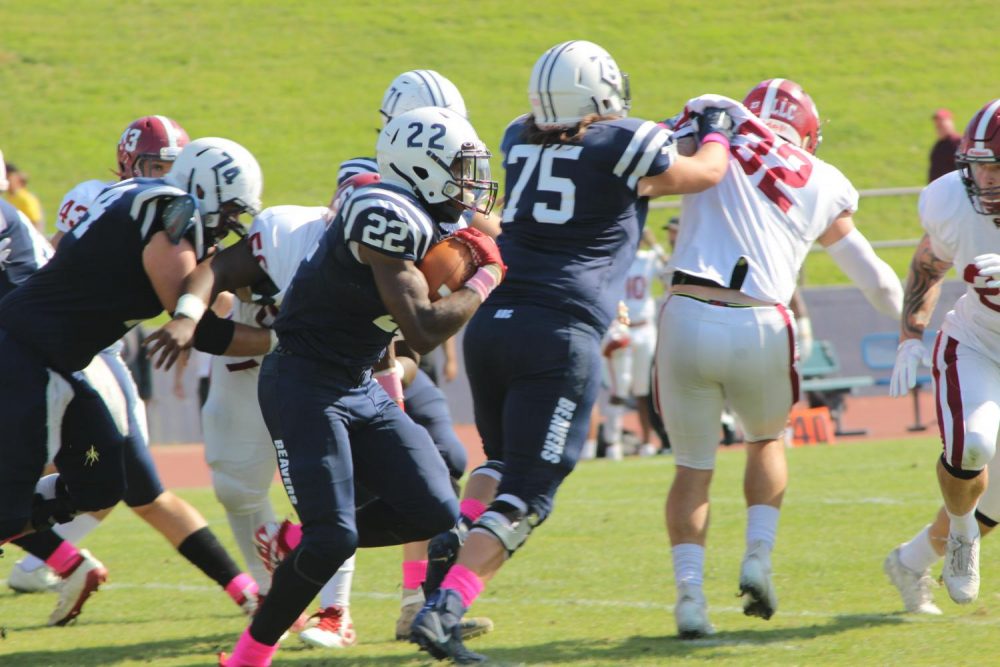 ARC running back Jeremiah Johnson carries the ball in game versus Sierra College on Oct. 26, 2019 at American River College. (Photo by Thomas Cathey)

The American River College football team defeated Sierra College on Saturday, Oct. 26 in a home game at the Beavers Stadium, with a final score of 45-14.

Head coach Jon Osterhout said he was satisfied with the effort of his team that day. He was also especially happy about beating a local team.

“To win a 916 game against a team that’s right up the street from us has huge implications in regards to recruiting and things of that nature,” Osterhout said. “So, to get another solid win over a good football program [puts us] in a good situation and positions us nicely going into week three of conference play.”

ARC received the kickoff to start the first quarter. But, in the first play of their offensive drive, quarterback Marco Baldacchino was picked off by the Sierra secondary, putting the ball into the hands of Sierra. Sierra was unable to capitalize off of the interception though, going three and out on the drive following the pick.

With ARC back in possession of the ball at the 4:10 mark of the first quarter, a 68-yard rush to the end zone from running back Jeremiah Johnson put the Beavers ahead 7-0 after the extra point.

After forcing Sierra to punt in the drive following the touchdown, ARC got the ball back at Sierra’s 14-yard line. After a few plays, ARC running back Vonathon Allen scored a 6-yard rushing touchdown, making the score 14-0 after the extra point going into the second quarter.

Sierra received the ball to start the second quarter, but again, ARC managed to hold them down and keep Sierra’s offense away from the end zone. After receiving the ball via punt return, ARC scored a field goal to cap off their next offensive drive, making the score 17-0 with 8:37 to go in the quarter.

ARC’s defense continued to dominate, forcing Sierra to punt after another three and out drive. Once the ball was returned to ARC, the Beavers scored another field goal with 2:45 left in the second quarter. Before the conclusion of the half, ARC scored yet another field goal, making the score 23-0 going into halftime.

On the kickoff back to Sierra to begin the second half, ARC’s special teams forced Sierra’s wide receiver Hayden Fay to fumble the football. Since ARC recovered the ball in their end zone, the referees ruled the play a safety. The safety bumped ARC’s lead to 25-0.

At 8:49 of the third, Baldacchino threw a 5-yard touchdown pass to wide receiver Naequan Parker, making the score 32-0 for ARC after kicker Isaiah Gomez’s extra point. Gomez completed another field goal with 5:31 left in the quarter, building upon an almost insurmountable lead at 35-0.

To make matters worse for Sierra, ARC scored another touchdown with less than two minutes to go. This time, ARC running back Jeremiah Johnson rushed 38 yards to the endzone, making the score 42-0 after the Gomez’s extra point.

Perhaps due to complacency, ARC’s defense allowed Sierra to score two touchdowns in the fourth quarter of the game. Despite the efforts of Sierra’s offense in the last quarter, the team was unable to overcome ARC’s substantial lead.

Although the ARC defense lost some steam in the fourth quarter, Baldacchino was pleased with the team’s efforts on both sides of the ball.

“I thought the the team ran the ball very well,” Baldacchino said. “We executed on offense and played big up front. We executed on all phases of the game for sure.”

With the win over Sierra, ARC improved their record to 5-2.

“It was a really good win for us overall,” Osterhout said. “It kind of gets us on track with where we want to be in terms of our outcome goals for the future.”