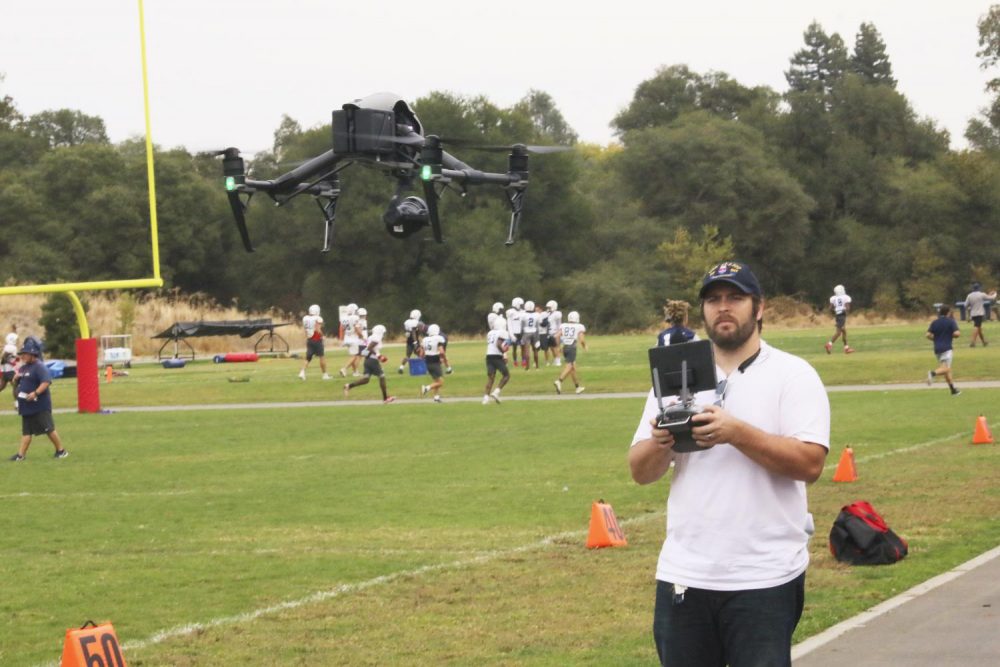 Dan Reid launches a drone to film a few periods of football practice at American River College on Oct. 16, 2019. (Photo by Jack Harris)

A black drone buzzed adjacent to the goal post, constantly adjusting for the best shot possible as the American River College football offense and defense slammed into each other on the field below.

The drone is the latest tool the ARC football team is using to improve its game. This is the first season of the partnership in which members of the ARC staff film the practices of the football team with a drone.

“We’re organized under the operations department. We support both instruction and other programs on campus and facility usage as well, so it’s sort of a large umbrella,” Lipscomb said. “This would be an athletic program that we’re out here supporting.”

The pilots cooperate with assistant director of football operations Jake Kincaid, who speaks with the coaches before practice, reviews the day’s practice schedule and then relays information about when and where to fly back to the pilot.

On Oct. 16, remote pilot operations assistants Jason Wilkes and Dan Reid were at practice to pilot the drone.

When the drone is in the air, Reid or Wilkes pilots the drone while Kincaid operates the drone’s camera.

“[Kincaid] actually participates because it’s a dual operator system,” Lipscomb said. “Dan’s going to fly the drone, and his job is just to make sure the drone is positioned safely, and then [Kincaid] is operating the camera, making sure that they get the footage that they want.”

The drone footage is supplemented by a stationary camera on a scissor-lift on the sideline. As a result, the drone mostly gets footage from the end zone angle. One of the biggest rules of flying the drone is that it can’t fly directly over people in case the drone runs out of battery or crashes.

The amount of drone footage they are able to get is limited by battery life. Based on a number of variables, like movement, heat and wind resistance, it can last between 15 and 20 minutes, according to Wilkes. For the purpose of safety, Reid and Wilkes generally keep it at 15 minutes.

The ARC football team has strictly scheduled practices, broken down into 5-minute periods. They have three batteries for the drone, and at 15 minutes each, they can fly the drone for approximately nine periods each practice. On Oct. 16, the practice had 22 periods. As a result, the football team has to be choosy about which periods are recorded by the drone.

“We mainly use it when our offense and defense get together, so like how we would film our games,” Kincaid said. “We basically do game film but for practice everyday with the drones and we have the wide shot sideline shout with the scissor lift over there, and the drones provide an excellent end zone shot.”

They began using drones to film practices when Wilkes had a PE class with Coach Osterhout and asked him if the drone footage would be useful. He says he has heard that the coaching staff is very pleased with the new partnership.

“From what I’ve heard from all the coaching staff, they love the footage and the angle we’re able to get while flying,” Wilkes said.