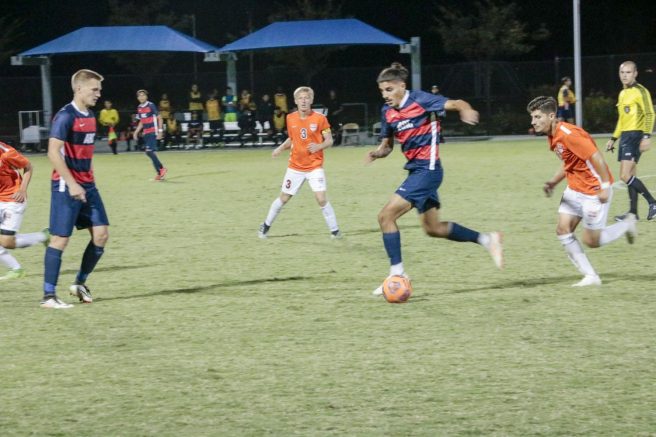 The first 24 minutes of the game was an even match, as the ball moved up and down the field with both teams taking shots on the goal. As they battled, both teams earned yellow cards as they fought for control of the ball.

The game remained stagnant, with neither team seemingly able to get the advantage over the other, until a critical header by freshman Miguel Aguilar that put the ball in the back of the net, earning ARC in the lead 1-0.

This built the momentum up for ARC and they were able to pressure Cosumnes for the majority of the game. Cosumnes had a couple of runs to the goal, however, because of key defensive stops by ARC freshman right defensive back, Chris Alvarez and blocks by sophomore goalkeeper Chris Sampo, Cosumnes was unable to get the ball in the goal.

Center Reily Wilm, who scored the second goal of the game off of a penalty kick, was an essential player to the game, according to head coach Paul Hansen.

“Our center Riley Wilm was a really solid player this game,” he said.

Hansen said he was also very impressed with center back and team captain, Dalton Cantanzaro.

“Our center back play was really good and that was Dalton.” Hansen said.

Dalton said he was also very happy with the game and his team.

“We felt a lot better going into it. Obviously we had some struggles last week at the beginning, you know. We had a loss and two ties and to come back here, hold it and then shut out and then get two goals, you know it’s a good feeling,” Cantanzaro said. “I think everyone played well and they actually left everything on the field, which we like to see.”