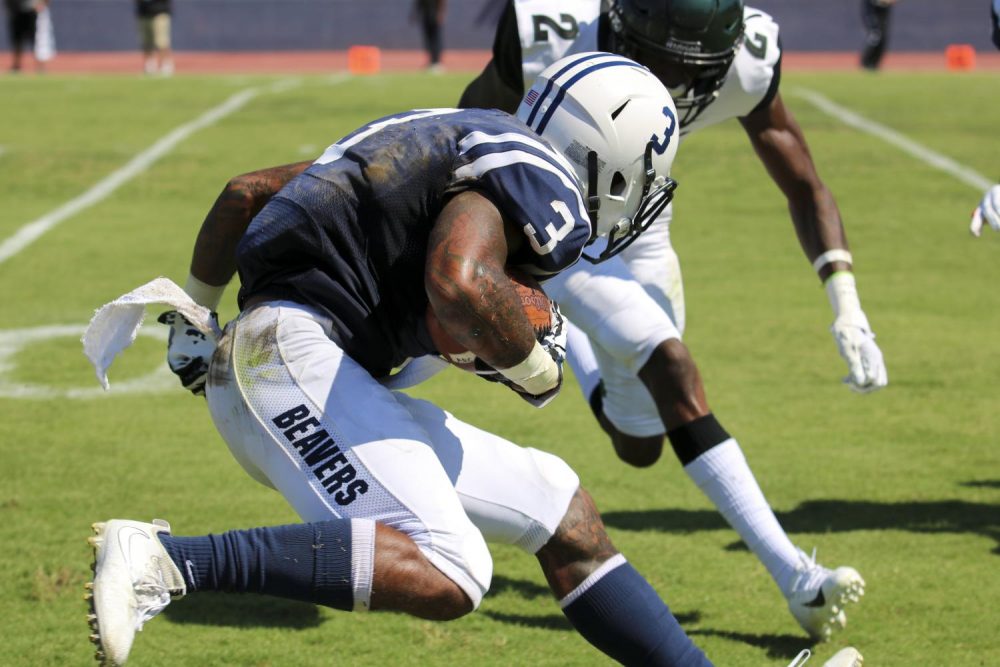 The football team at American River College emerged victorious against the defending state champion Laney College in its home opener for the season at Beaver Stadium on Sept. 14. The final score was 15-10 in favor of ARC.

ARC’s head coach Jon Osterhout said he was pleased with the performance of his team and the start they have gotten off to in this season.

“It was a heck of a win for our football program,” Osterhout said. “It was good to see [the team go] 2-0 [this season] and accomplish some of our outcome goals and to get a winning record in our conference.”

In the second quarter, Laney College’s offense started to pick up steam. Laney running back Tyrell Smith marched his team down field, running for 46 yards out of the 63 total earned by Laney during that drive. At the 9:07 mark of the quarter, quarterback KJ Gardner threw a three-yard pass to RJ Stern for the first and only touchdown of the game, making the score 7-3 after the extra point.

Capitalizing on the success of the previous drive, Laney cornerback LJ Anderson intercepted a pass from ARC quarterback Grant Patterson, giving the ball back to Laney’s offense. While not scoring a touchdown, Laney was able to score a field goal by the end of its drive, making the score 10-3 for Laney.

When ARC got the ball back, their offense marched downfield, all the way to Laney’s goal line. However, they were not able to get into the end zone and had to settle for another field goal. At the conclusion of the half, Laney led ARC, 10-6.

In the third quarter, ARC’s defense was able to hold Laney’s offense to zero points. At 2:51 of the fourth quarter, kicker Gomez completed another successful field goal, making the score 10-9 with Laney still ahead.

With the game on the line heading into the fourth quarter, the Beavers managed to overcome their one-point deficit with another field goal by  Gomez. ARC was now leading Laney, 12-9.

With less than five minutes left in the game, ARC scored another field goal, giving themselves some breathing room on the scoreboard. ARC’s defense was able to prevent Laney from scoring any more points, making the final score 15-10 in favor of ARC.

Despite not getting much done offensively, Osterhout said he was still proud of the way the defense and special teams performed.

“There’s a lot of things we gotta get cleaned up but I was proud of our football team for the grit that they displayed throughout the course of the game,” said Osterhout. “We hit five field goals and won the football game so credit to the defense and special teams.”

ARC running back Jeremiah Johnson said he was also satisfied with the team’s performance and is looking forward to the rest of the season.

“I feel like we gave a good run and we focused on our tasks and accomplished what we had to do,” said Johnson. “I was just happy to play and help my team and get this objective done. It’s just another game for us, we just gotta keep going.”

With the Beavers football team starting at 2-0, Osterhout said he expects his team to keep the streak going.

“We’re gonna build on this momentum and continue to go, so we’re fired up.”Osterhout said.