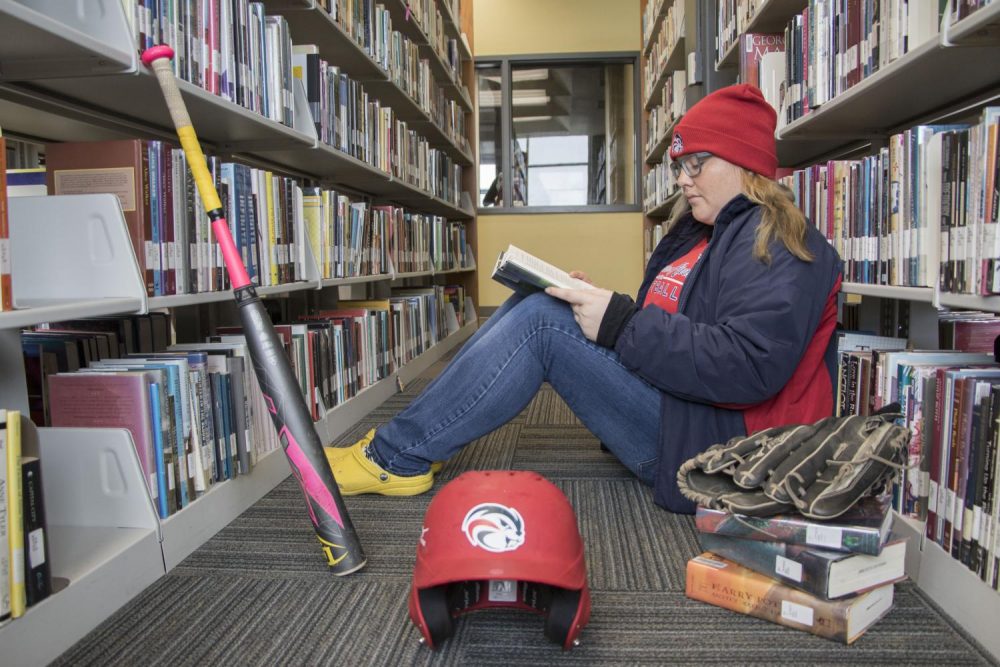 American River College softball player Celine Castonguay uses the campus library as a second home to study in between classes and her softball practices. (Photo by Ashley Hayes-Stone)

In February 2018, Celine Castonguay was a college freshman over 1,700 miles away from home at Missouri Valley College playing softball. Over the course of the school year, Castonguay realized MVC wasn’t the right fit for her — in regards to softball or campus size.

Now Castonguay, a mathematics major, is 20 years old and currently plays for the women’s softball team at American River College.

During her time away for school, Castonguay realized that she wasn’t obtaining what she wanted from the opportunity she had taken.

With her decision to return home, Castonguay had to do some adjusting — not only to a new campus which is vastly different in size, but to adjust to an entirely new coaching staff and team.

“[With the coaches] we have a lot of open dialogue, which is nice,” Castonguay said. “There’s a lot of ‘Hey I don’t understand this can you explain it again.’”

With a new coaching staff came a new training schedule that Castonguay had to learn to adapt to.

“The workouts are a lot different, in Missouri we did a month of conditioning and then we just did practice every single day, and at ARC we’re doing practice, but we also have workouts in the morning,” Castonguay said. “I think [the ARC workouts] are more effective practice too.”

According to Castonguay, her new circumstances weren’t completely foreign. In addition to Castonguay playing the same positions as before, catcher and third base, the roster size at ARC is similar to MVC, so being on a team with 17 other players isn’t unusual for her.

“[The ARC women’s softball team] is a great group of people. It’s the team you want to be on,” Castonguay said.

Making connections with the other players wasn’t difficult for Castonguay. Teammate and fellow third baseman, Isabel Hernandez’s friendship came easily with Castonguay, which helps the two on the field.

“It is very easy helping each other when we see something that we both can fix,” Hernandez said. “I think it’s fun having her play the same position as me because we always can help each other and make each other better.”

In addition to adapting to a new team and campus, Castonguay had to readapt to returning home.

“It’s weird because I don’t have as much time to do things, living on campus versus living at home because I have a commute now,” Castonguay said. “It’s a little bit more stress but at the same time I feel more comfortable at home than I would be anywhere else.”

When it comes to managing her schedule between team workouts both in the morning and afternoon as well assignments, Castonguay has found a second home: the library.

Jennifer Bartholdi, teammate and longtime friend of Castonguay, has had the opportunity to watch Castonguay grow as she has moved into this new period of her life.

“I think that since coming back she has matured in her school work. The way she approaches things and executes them has improved,” Bartholdi said. “Celine also seems surer of herself.”

Lately, Castonguay hasn’t only been looking at the present, she is focused on her future and what her next step will be to get there.

“[After ARC] I think [softball] is a done thing it’s been a while, I’m thinking about transitioning into coaching, which will be really fun, like 17 years is a long time for a sport,” Castonguay said.

After ARC, Castonguay’s goal is to transfer to California State University Monterey Bay, in the fall of 2019. With her want for a school that has a program to best suit her educational goals and a small campus environment CSUMB was at the top of the list.

“It doesn’t matter where you’ve been or what you’ve done, you have to work hard to get [something] out of it,” Castonguay said.