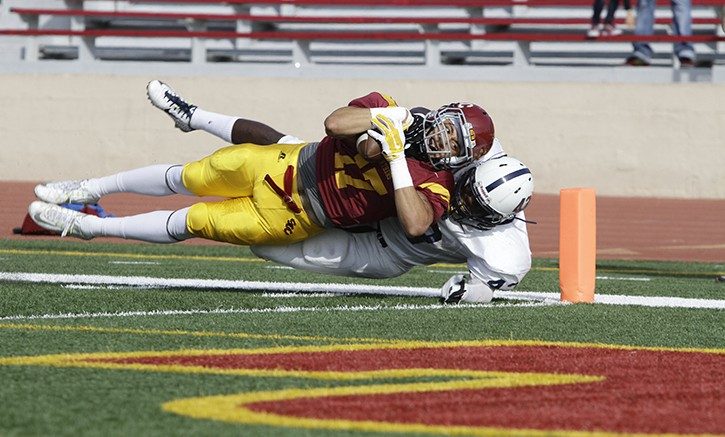 Former ARC linebacker Lawerence Hall stops a Sacramento City College player from scoring a touchdown during last seasons game on Nov. 15, 2014. ARC won the game 44-23 and must win the game Saturday to have any chance of making the playoffs. (File Photo)

“Everything felt amplified, things are brighter and sounds started sounding like the volume is turned up,” said Marissa Hady, former American River College student, describing her concussion experience during a soccer game in October 2018.

ARC have experienced a concussion sustained during a sports game. Concussions can cause various personal and academic problems. Students at ARC who have suffered a concussion struggle with the ability to learn and focus in a classroom.

Hardy says she felt unmotivated in the classroom after her concussion.

“It was hard for me to focus in a classroom because I was focused on everything that would be agitating me in that moment,” Hardy said. “I also began to have aggressive sleep paralysis and forgetfulness from time to time.”

Ariel Caspar, staff writer for The Current, says she faced difficulties after getting a concussion during a volleyball game November 2018.

“It created a mental fogginess for myself. I had a hard time finding words and remembering something that happened during the day,” Caspar said.

After Caspar’s concussion, she chose to take a break from school to give herself time to recover. She said she felt she couldn’t go back to school because being in a classroom affected her vision and her ability to focus.

“It messes with your depth perception on how far or close things really are,” Caspar said. “The aspect of focusing in general was really hard, looking at something and processing what I was looking at and then applying it was a struggle for me.”

Shaniece Daniels, small forward for the women’s basketball team at ARC, suffered a concussion during a home basketball game in January. While Daniels was in the hospital for a few days, she was eager to get back to school although she was still dealing with head pain, sensitivity to lights and her focus.

“I’ve never had a problem with paying attention in class and doing what I need to do, but right now I feel like I am struggling and it plays with your mental a lot when you know you’re capable of doing more,” Daniels said.

According to the Health Line, a health information website, the recovery process for a concussion in most cases takes up to seven to 10 days. However, if an athlete doesn’t follow his or her doctor’s orders or gets the rest he or she needs, the process can go as long as several months to a year, which can be a sign of post-concussion syndrome.

Mark Giorgi, coach for the men’s basketball team at ARC, said the process of treating mid-game concussions is very precise.

“We have an athletic training staff that goes through a protocol, so if a concussion happens during a game, the trainer will come out run some visual test and if need be they will bring the player to the training room to run more test,” Giorgi said.

Giorgi explained that in order for an athlete to play again it depends on how severe the concussion is and they will have to pass a concussion test before they can be release to practice.

“Our trainers are all up to date when it comes to this kind of stuff and coaches have to also go through a learning process, I think that ARC errs on a side of caution to contain it,” Giorgi said.