ARC golfer’s drive hopes to take him to the pros 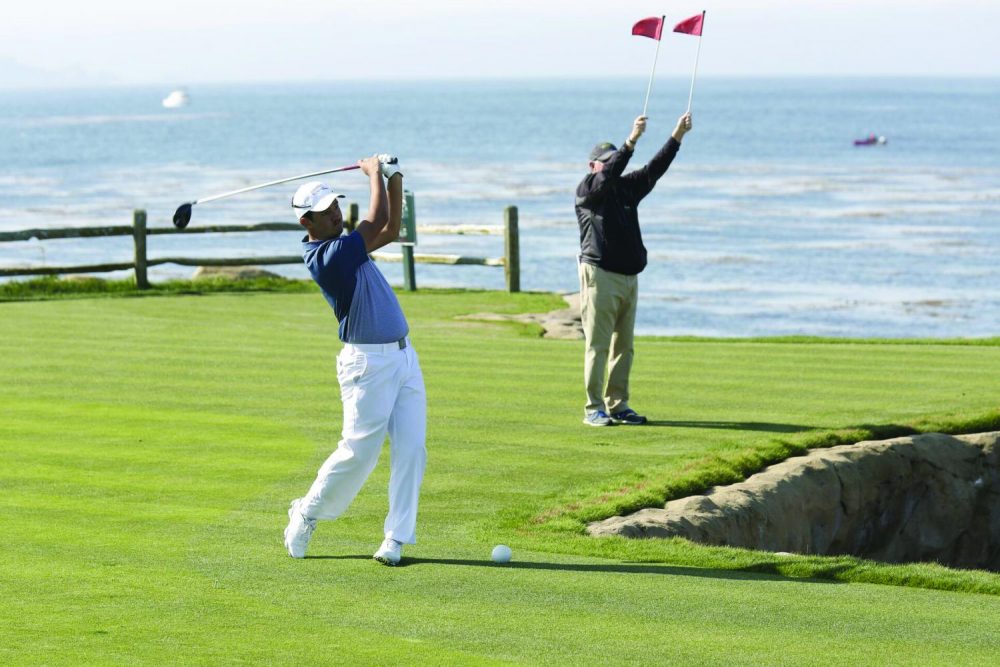 Jonathan Tanihana plays at the Nature Valley First Tee Open at Pebble Beach for the PGA Tour Champions. He played alongside American Professional golfer, Kevin Sutherland and placed second out of the approximately 81 golfers who played at the event.

The course was muddy at Whitney Oaks Golf Club in Rocklin at the American River College golf team’s first Big 8 Conference Tournament in February. Jonathan Tanihana played the course with a close attention to his swings. He wasn’t thinking about the other players or the mud under his feet or the fact that last season he missed a first place spot by a close margin.

By the end of the day, Tanihana blew the competition out of the water, winning first place for individuals by 11 strokes.

“That was really big for me,” Tanihana said. “To come out of the gate and say to everybody ‘Hey I’m serious about this, this year. There’s no playing around anymore.’”

Ever since Tanihana was a kid, he would join his father, Russell Tanihana, at the golf course and participate in youth tournaments. When he started at John F. Kennedy High School, the sport became a lifestyle for him.

During trips to the golf course he began to take the game more seriously, trying to win the game. Although he doesn’t remember the first time he beat his father, from then on he began to work on improving his game to win against other schools and win in outside tournaments.

“I said, ‘Hey look, if you want to really measure yourself, you gotta compete with some other kids you’ve got to play in some bigger tournaments,’” Russell Tanihana said.

Despite his numerous victories his dad made it clear to him early on that beating the other players wasn’t the goal.

For Tanihana, golf is more of a mental game than a physical. When he was young, his father taught him some of the formative techniques while playing on the William Land Park golf course.

Russell Tanihana described a day at the golf course where he and Jonathan were matched up with two strangers.

The technique Tanihana employed involved close examination of the green, both with his eyes and by walking on the green to get a feel for the shape of the grass.

“My dad used to tell me that ‘You’re not playing the other people, you’re playing against the golf course.’ So as I’ve gotten older, I’ve gotten better at not worrying what other people do, just focusing on myself,” Tanihana said.

Outside of ARC, where Tanihana majors in communications, he spends his days on the golf course teaching kids golf at Haggin Oaks—some as young as 3 years old.

Kelli Corlett works with Tanihana at Haggin Oaks Golf Course and has known Tanihana since he was a kid and participating in programs she taught.

“He has a great amount of patience with the kids and gives them someone to look up to,” Corlett said. “I’m really excited to see where he goes and what he does in the future.”

At ARC, the golf team’s coach Michael Thomas says he trusts Tanihana to motivate himself and work towards his dream of playing pro.

Tanihana has worked on his golf swing since he was a kid, and even though it is like second nature to him, he sometimes can lose control.

Tanihana recalls a game last season at Santa Rosa where the wind and rain doubled down on his own poor performance that day hitting, what he called ‘absolutely horrendous shots.’

“Every part of me just wanted to take my club and chuck it as hard as I could,” Tanihana said. “It was just one of those [days] where clearly nothing is going well.”

Tanihana will leave American River College next semester and is considering playing professionally after attending a four-year college. Overall, he wants to work as hard as he can to improve as much as possible.

“I’ve never been the most talented golfer in the world but I promise you I’ve worked harder than 99 percent of the people that I grew up playing against and around,” Tanihana said. “If you’re waiting on other people to tell you to do something or give you approval then you’re going to be waiting for a long time.”