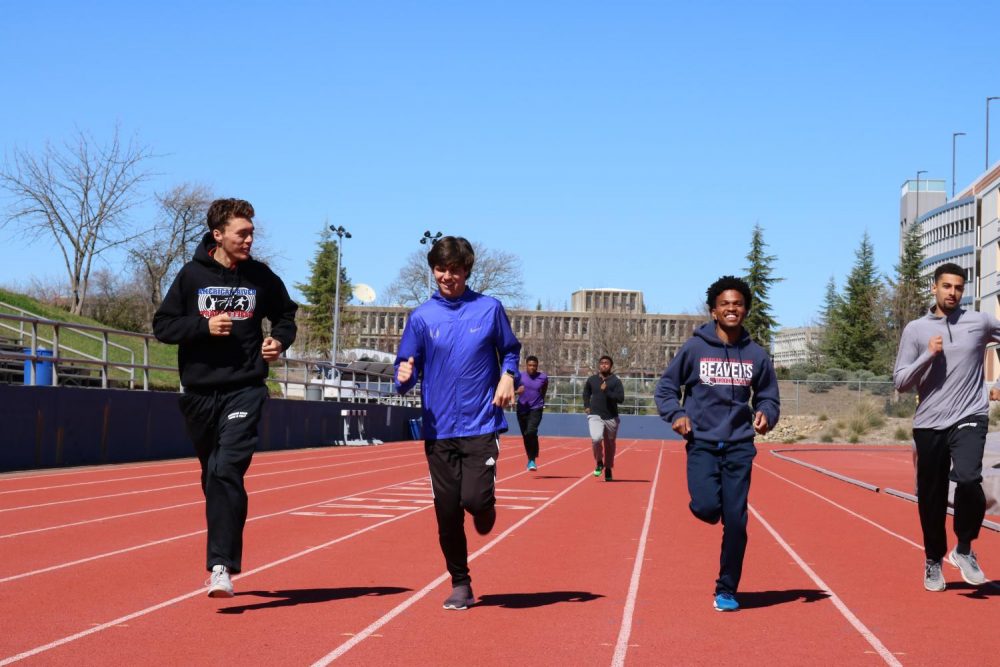 (From left to right) Runners Ricky Frank, Charles Pierce, Jordan Taylor and Zavier Beevers warming up at the start of practice. (Photo Illustration By Thomas Cathey)

After winning the Big 8 and NorCal titles last season, the men’s track and field team at American River College is now gearing up for another big season. The team officially kicked off its season on Feb. 22, at the Diablo Valley College Invitational in Pleasant Hill, California.

The team has competed in six events so far, as they have just barely began its season. For head coach Rick Anderson, the goal this year is to not only repeat last season’s results, but to exceed them.

“Our hope is always to repeat as conference champions, and to win the NorCal Championship which we have won about eight years out of the last 10,” Anderson said.

Despite placing high in the in the California Community College Athletic Association Championships in 2018, with sophomore Myles Ellis earning second place in the 400 meter-dash, a CCCAA title is not as high a priority to Anderson and his athletes as a NorCal or conference title does.

“We really focus more on conference and NorCal championships than state,” Anderson said. “At NorCal you can kind of move some guys around and get points in different areas. In state you do not really move guys around, you just put them in their very best event and just let them go for it and see what happens.”

Ellis’ best event last year was the 400-meter dash, winning first place in his conference in addition to earning second at CCCAA championship. Despite a stellar debut season, Ellis believes there is more to be desired.

“I expect this season to be a better one for me than last season was,” Ellis said . “Last year I got off to a slow start with injuries and soreness. But this year I have think I have started off good and am on the right track.”

Another standout from the team is sophomore Brett Lombardi, a decathlon athlete who is a defending CCCAA champion in the 1500 meter run category. Although Lombardi is a champion and believes he has started off strong this season, he admits there is still plenty to work on.

“I definitely started off the season strong, I am leading California by a pretty comfortable margin, so I feel pretty comfortable coming out for this year,” Lombardi said. “I don’t feel like my first performance was not totally where it needed to be but I think that’s striving me to push a little harder to be a little better in the next performances.”

Never being fully satisfied with results is known as a hallmark of a great champion. With young athletes like Ellis and Lombardi, who achieve great results but alway strive to be even better, the track and field team is likely to win even more events and championships this season.