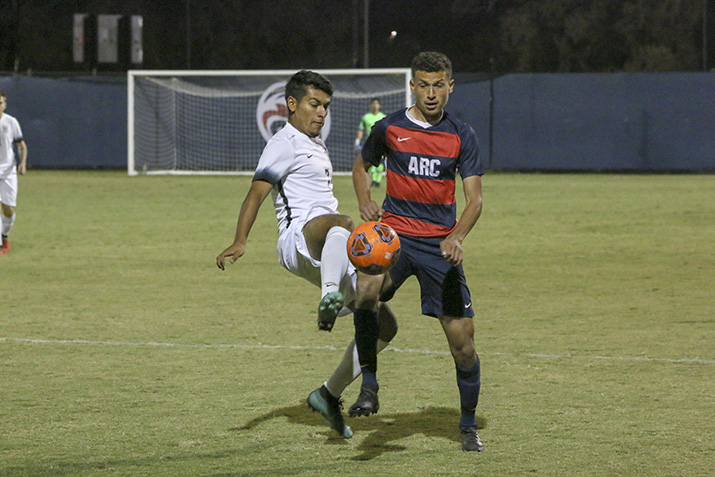 The American River College men’s soccer team lost against Folsom Lake College, 2-0, in a Big 8 Conference home game on Nov. 6 moving the team to 5-12-3 in the season.

FLC’s offense dominated the first half with multiple shots on target that Beavers goalkeeper, Christopher Sampo stopped several times to end the half 0-0.

“They had a lot of shots, most of them in the first half were from distance,” Sampo said. “Not until the second half that they got in the box and started really putting them on target and testing me, but I feel that I did OK.”

The second half of the game started slow but the Falcons sped it up with a goal in the 54th minute when defender Mason Lopez took a corner-kick from forward Tanner Boyea, giving the Falcons a 1-0 lead.

Beavers captain Dalton Catanzaro said that the team was more focused on defending heading into the match.

“One thing is that we were just defending, we weren’t trying to go for as much as we should have,”  Catanzaro said. “I mean if you defend too long it’s bound to happen that you are going to get scored on, no matter how good defends we are and stuff like that, we are just gonna make some pushes forward.”

After the first goal, the Beavers increased their attacks unsuccessfully. In the 71st minute, Falcons forward Chase Gray received an assist from midfielder Abraham Iniguez making the match 2-0 sealing the victory for FLC.

Catanzaro said that Sampo had a pretty busy night and without him, the score would have been much worse.

“He is, most of the time why, we keep zero-zero or why we make it because he would make saves that are just like ‘Wow, really?’” Catanzaro said.

Head Coach Paul Hansen said he was disappointed with the score against a local rival.

“The overall effort of the guys was really good, so there is not disappointment there,” Hansen said.

According to Hansen, the plan was to play defense to keep the game 0-0, but the plan “crumbled” after the first goal by the Falcons.

“We wanted to do better but they had a better season than we had this year, you know so it is not that surprising the way this game ended up, but we defended well, you know, we kept them zero-zero through the half,” Hansen said. “They were a little stronger than us on the defensive side and it turns out on a disappointing night.”

The Beavers had a final game on the season on Nov. 9 at Modesto and Hansen thought the game would have have a better ending.

“For Friday we are playing in Modesto a team that’s actually last place on our league, so hopefully we get in the season with a win scoring some goals and hopefully we end on a positive note,” Hansen said.

Hansen acerted on his predictions and the Beavers won 4-0 against Modesto on Nov. 9.