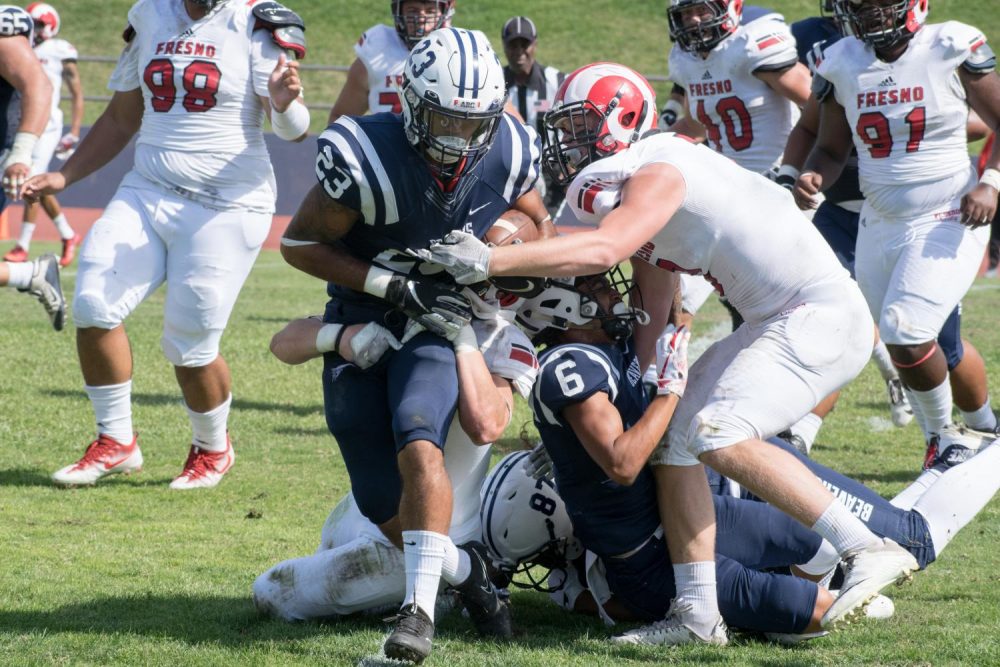 Running back Daniel Wright Jr. is tackled by a Fresno player at the ARC v. Fresno game on Saturday Sept. 29. (Photo by Patrick Hyun Wilson)

The American River College football team lost to Fresno City College 17-3 for their third loss of the season on Saturday. This loss comes right before a bye week that will lead in to their first conference game of the season.

The game began poorly for the Beavers. Two minutes into the first quarter, the Beavers brought the ball to the Rams’ 48-yard line.

On the fourth down, kicker Jesus Gonzalez attempted a punt, which was blocked by the Rams and returned to the ARC 32-yard line. The Rams made nine consecutive runs for their first touchdown and a successful kick attempt, leading 7-0 at the end of the first quarter.

Head coach Jon Osterhout spoke to the Beavers during the end of game huddle and took credit for the loss on Saturday.

“[We] just gotta do a better job, gotta reevaluate and reassess where we’re at as a program as we approach conference play,” Osterhout said. “I’m the head football coach and it’s my objective to ensure that the football players are in a position to win, … we gotta get back to the drawing board to see where we’re at, moving forward.”

Quarterback Jacob Cruz attempted 21 passes; only eight were completed during the game.

Quarterback Marco Baldacchino was off the bench for the second and fourth quarter of the game. In the second quarter Baldacchino led the Beavers, in a series of passes and runs, to the Fresno 5-yard line. He was sacked for 10 yards on the third down and so in their fourth down, kicker Julian Diaz made a successful field goal for the Beavers who then trailed 7-3 by the end of the first half of play.

In the third quarter, the Beavers’ defense was able to hold the Rams at bay, however they were still unable to score. The quarter ended with no points gained on either side.

The Rams began the fourth quarter at the ARC 22-yard line and were able to make a successful field goal three minutes into the final quarter of play, leading the Beavers 10-3.

After a three-and-out in the fourth quarter, a fake punt by kicker Jesus Gonzalez brought the Beavers a first down, but the ground was lost when Baldacchino was sacked for 6 yards

Fresno, in five successful plays in less than two and a half minutes, scored the final touchdown of the game – with a successful conversion – ending the game 17-3.

“We weren’t able to maintain the momentum on our side,” Osterhout said. “Got a long way to go to continue to improve as a football program as we approach conference play.”

The Beavers will head in to the conference games with a season record of 2-3 after they were unable to score a touchdown during the game with Fresno.

“We need to get it together offensively. Our defense played better this week,” Cruz said. “They got stops and we needed to convert.”

Running back Eric Davis Jr. played for the Beavers in the game on Saturday, making a successful run for 9 yards.

“I think we just didn’t connect as well as we usually do on the offensive side of the ball. We just gotta turn the page step up and bounce back after our bye week,” Davis Jr. said.

The team will face off against College of the Siskiyous at a home game on Oct. 13 for the first conference match of the season.

“We weren’t clicking and that’s on us,” Cruz said. “We needed to put points on the board, that’s how it’s supposed to go.”

After next weekend, the Beavers will return to the drawing board and reevaluate what they can do better in the future.