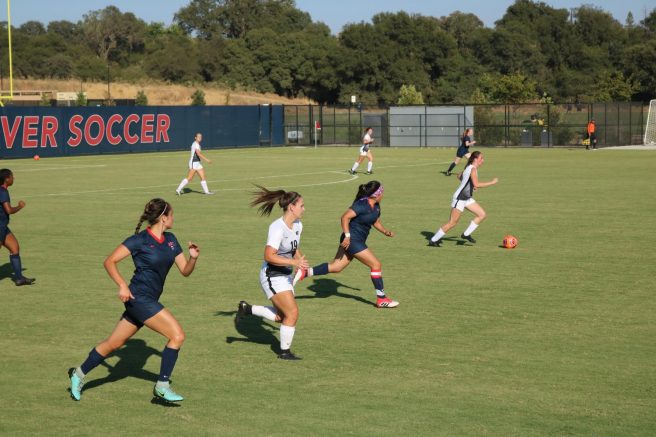 ARC and Butte head down the field.

In the women’s soccer team’s home opener, the American River College Beavers lost 2-1 to the Butte Roadrunners on Aug. 31.

During the first half of the game, both teams were communicating well on and off the field. Players on the sidelines from both teams encouraged their teammates.

ARC moved the ball and passed well through moving up and down the field in small groups. They played strategic defense by grouping together during defensive moves and stayed on top of the Butte players from the start of the game.

Butte’s defense could’ve been stronger during the beginning of the game, and ARC’s defense, including the team’s goalie Josie Gover, kept them at bay. ARC began to play very physical towards the end of the first half and pushed back on Butte to keep their momentum going.

ARC‘s defense began to weaken towards the middle of  the first half and they began to struggle against Butte’s defense and with working together.

They stopped communicating with each other and players were becoming quiet and weren’t getting to the ball quick enough.

“I feel like first half we weren’t really connecting as much and attacking,” said forward Savannah Tijerino-Santos.

The Beavers were becoming visibly frustrated but pushed through.

In the second half, ARC still hadn’t scored and were having difficulty keeping up with Butte and their tight defense. ARC was getting frustrated and began being more physical in their defense.

There were several elbows thrown and lots of shoving from both teams due to the intensity of the game.

Both teams got through the second half by staying on top of each other and trying to finish the game strong. ARC was finally able to score 20 minutes into the second half with a goal from mid-fielder Monet Lopez.

However, ARC didn’t end the game strong; the teams was burned out by the end but they pulled together as a team to finish the game.

“Second half we did well at connecting, attacking, and ball movement.” said forward Tijerino-Santos.

Finishing games strong overall seems to be a recurring issue for the Beavers.

The team is looking forward to possibly making the playoffs this year and improving from last year.

“We want to go to playoffs and we want to be the state champs,” Avila said.