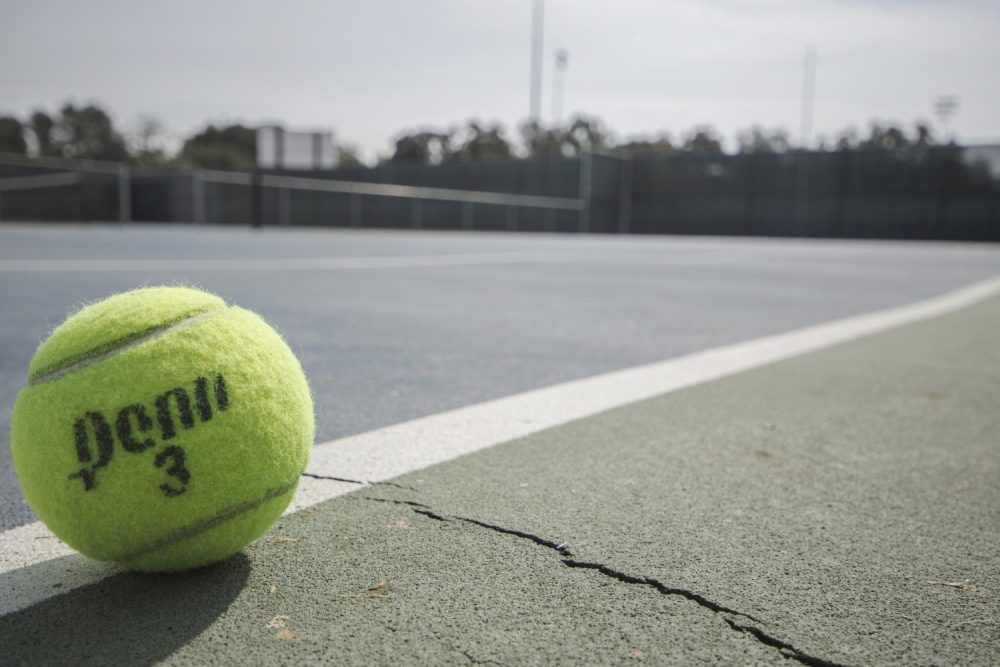 A tennis ball sits on the cracked ground of the American River College tennis courts. The courts are so badly cracked that many of them are unusable. (Photo by Brienna Edwards)

The shrill scratch of sneakers can be heard on the courts as the men’s tennis team practices in the late afternoon heat. The team is focused and determined, the consistent thwack of rackets reverberating throughout the courts.

Although there are 12 courts in total at American River College, a quarter of them are unusable because of a partially botched soil treatment at the time of construction.

According to Dan McKechnie, Director of Facilities Planning and Construction at ARC, the issue is a “subsurface soil condition” due to “small portion of the cement treatment that failed.”

Two of the courts are currently without nets, and an additional two are unplayable due to their current state of disrepair. Cracks span the edges of the courts, the chalky green surface wavy with tension and water damage.

“The state of the courts is unacceptable” said Coach Bo Jabery-Madison, who has been mentoring the mens tennis team for the past 13 years.

The tennis courts were constructed at the same time as the parking structure, in January of 2013. According to the American Sports Builders Association, it is recommended that tennis courts should be refurbished approximately every four to eight years, depending on wear and tear and frequency of use.

The damage the courts have sustained over the past five years poses potential danger to the team— rolled or sprained ankles, which can lead to injuries hindering players for participating in matches and tournaments.

The school is currently coordinating with the installation contractor to fix the issues, yet repairs were delayed because of several rounds of soil testing to get to the root of the issue.

Despite the state of damage the courts are in, this has not deterred the team’s determination to the sport, according to Jabery-Madison. With several team members taking the lead in the doubles draw and reaching the semifinals in the singles, ARC excelled in this year’s Northern California Junior College Regional Championships, which took place Sept. 29 through Oct. 1.